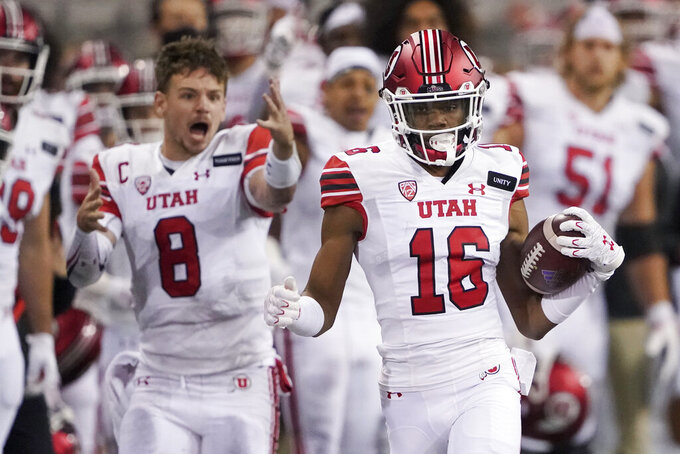 After a miserable first half, Molden and his teammates pulled off one of the biggest comebacks in Washington’s history.

“I was actually pretty emotional to be honest, just because that was a street fight of a game,” Molden said.

Down 21-0 at halftime, Washington capped its comeback with Dylan Morris hitting Cade Otton on a 16-yard touchdown pass with 36 seconds left to give the Huskies a 24-21 win over Utah on Saturday night.

Morris and Otton were the stars on the final drive, and McDuffie’s interception of Jake Bentley’s desperation heave in the final moments clinched the stunning comeback.

It was the fifth time in school history Washington (3-0) rallied from a deficit of 21 or more points to win, and the first since 1989 when the Huskies trailed UCLA 21-0 and rallied for a 28-27 win.

“That was probably the first comeback I’ve ever been a part of,” Washington linebacker Zion Tupuola-Fetui said. “I just had to take in the moment.”

Morris was brilliant on Washington’s final drive, taking the Huskies 88 yards in less than four minutes, capping the winning drive by rolling to his left and throwing across his body to find his big tight end. Otton had eight catches for 108 yards and a pair of second-half TD receptions.

Morris was 23 of 38 for 272 yards and the two TD passes to go along with three interceptions. He was 6 of 9 for 71 yards on Washington’s final drive, including a play where the snap was botched but Morris still hit Otton for a completion.

“That’s the type of calm that he has through adverse situations,” Washington coach Jimmy Lake said. “Really that sequence right there really captures what Dylan Morris is about.”

The unexpected matchup between the Utes and Huskies came after both teams had their originally scheduled games canceled due to COVID-19 issues with their opponents. Washington was supposed to play rival Washington State while Utah was scheduled to travel to Arizona State.

Bentley was 16 of 23 for 144 yards and one touchdown in his first start for Utah. But Bentley also threw two interceptions, one in the third quarter that helped Washington’s comeback and the desperation throw in the final moments.

“The defense is doing a great job of getting the ball back for us and getting off the field and we’ve got to stop giving it back and that starts with me. It’s frustrating for sure because you feel like you let the team down,” Bentley said.

Ty Jordan rushed for 97 yards as Utah (0-2) rolled up 215 yards rushing. But Jordan also had a costly fumble in the fourth quarter deep in Washington territory that cost the Utes a chance to pad their lead.

“The way we played in the first half is indicative of who we can be, but we didn’t finish,” Utah coach Kyle Whittingham said.

Down 21-0 at halftime, Washington awakened in the third quarter on both sides of the ball. Kamari Pleasant’s 2-yard touchdown run capped the opening drive of the half and Washington pulled within 21-10 after Molden intercepted Bentley, leading to a field goal.

On Utah’s next possession, Bentley was stuffed on a fourth-and-1 QB sneak at the Washington 41 and turned the ball over on downs. Three plays later Morris hit Otton on a 21-yard TD strike and Utah’s lead was down to 21-17.

Morris had one mistake midway through the fourth quarter when he underthrew Ty Jones and was intercepted by Vonte Davis, but the freshman QB made up for it on the final drive.

“He’s a steady, leader of our team, and it showed up in the second half,” Otton said.

Utah’s first half was nearly perfect, a strong rebound coming off last week’s loss to USC.

The Utes had 221 total yards and 134 yards rushing in the first half. They were 4 of 7 on third downs and Bentley was excellent at keeping plays alive with his feet.

When he did take his shots, Bentley didn’t miss. On the final drive of the first half, Bentley connected with Bryan Thompson on a 19-yard strike on third down, then found him in the back corner of the end zone for a 21-0 halftime lead.

Utah: The Utes like playing close games against Washington. Five of the past six have been decided by a touchdown or less.

Washington: Tupulola-Fetui has been a revelation for Washington’s defense. He was listed as a backup on the initial depth chart to begin the season but an injury to Laiatu Latu gave Tupulola-Fetui a chance to start as a pass rusher. He had three sacks against Utah and now has seven sacks and three forced fumbles.

“To have that type of production in three Pac-12 games is phenomenal," Lake said.

Utah: The Utes are scheduled to host Oregon State next Saturday.

Washington: The Huskies are scheduled to host Stanford next Saturday.