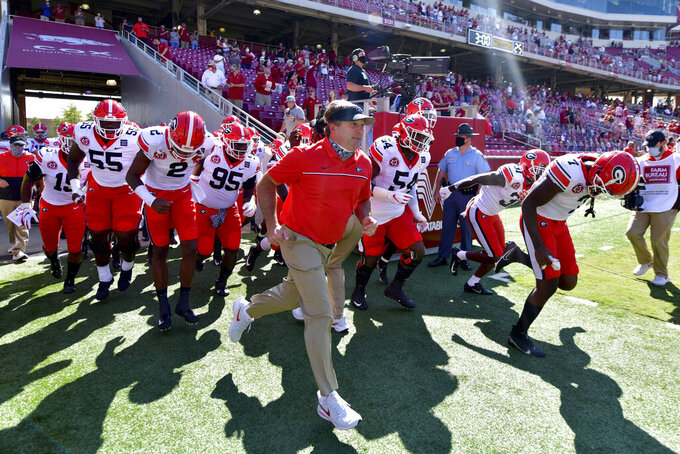 No. 13 Texas A&M visits No. 2 Alabama on Saturday, looking for its biggest SEC victory since Johnny Manziel beat the Crimson Tide in Tuscaloosa in 2012.

No. 7 Auburn goes to No. 4 Georgia on Saturday night as the second month of the season starts, but only the second week of SEC play.

The rest of the schedule features a rematch of last season's Atlantic Coast Conference championship game between Virginia and No. 1 Clemson and a return to action by No. 25 Memphis, which has been sidelined by a COVID-19 outbreak since it opened with a Labor Day weekend victory.

The rivalry dates to 1892 and it typically gets played in November. Even before the SEC revised its schedule to an all-conference slate to deal with the possibility of pandemic disruptions, the Bulldogs and Tigers were set to play the earliest date they ever have — Oct. 10.

The new schedule pushed Auburn-Georgia up another week. The major storyline will be who plays quarterback for the Bulldogs. Georgia's offense needed a while to get rolling last week at Arkansas, but clicked in the second half behind former walk-on Stetson Bennett.

This week, former five-star recruit and Southern California transfer J.T. Daniels has been medically cleared to play for Georgia. Daniels started as a freshman for the Trojans in 2018 and injured his knee in last season's opener.

Bo Nix and Auburn are trying to build off a solid victory at home last week against Kentucky. Coach Gus Malzahn's Tigers have lost six of seven, including three straight to coach Kirby Smart and Georgia.

Mond is no Johnny Football, but leading the Aggies past the Tide could be a program-changer for third-year coach Jimbo Fisher.

The fourth-year starter is a very good, if inconsistent, player. He has passed for 44 touchdowns and run for 15 more in the last two years under Fisher. Expecting a major breakthrough at this point might be a stretch, but the opportunity is there for him to have moment that makes Heisman runs — as Manziel can attest.

.917 — Oklahoma’s winning percentage against Iowa State (76-6-2). The Sooners look to bounce back against the Cyclones in Ames after being upset by Kansas State last week.

3 — Number of points permitted by No. 24 Pitt in the second half this season. The Panthers try to remain unbeaten against North Carolina State.

15 — Games UCF QB Dillon Gabriel has played. He has thrown at least on touchdown pass in all of them. The No. 11 Knights host Tulsa.

16 — Receptions for Boston College's Hunter Long, most in the nation for a tight end. Long and the Eagles host No. 12 North Carolina. Long has 174 yards and two touchdowns.

23 — Consecutive home victories by No. 1 Clemson, which hosts Virginia after an off week.

The first of three games that decide the Commander-in-Chief's Trophy might have sneaked up on college football fans.

This is Air Force's first game of the season. The Falcons play in the Mountain West, which postponed its season in August, but gave AFA the go-ahead to play its fellow service academies.

Turns out the Mountain West will play fall football after all. It released its schedule Thursday. The Falcons will play six conference games to go along with Navy and Army.

Air Force and Navy have alternated wins and losses for the last six years.

The weekly disclaimer that during a pandemic-induced financial crisis it is unlikely many coaches will be fired. That said, it's without question a pivotal year four for Herman.

The Longhorns needed a miraculous comeback to escape Texas Tech with a victory last week. Now they welcome TCU. The Horned Frogs have owned Texas since they joined the Big 12, going 6-2.

For Texas to truly be back, Herman needs to have the Longhorns routinely beating these conference rivals that don't have nearly the resources he has in Austin.

If he can't, 'Horns fans will continue to question whether Herman is the guy to bring Texas back — whatever that means.