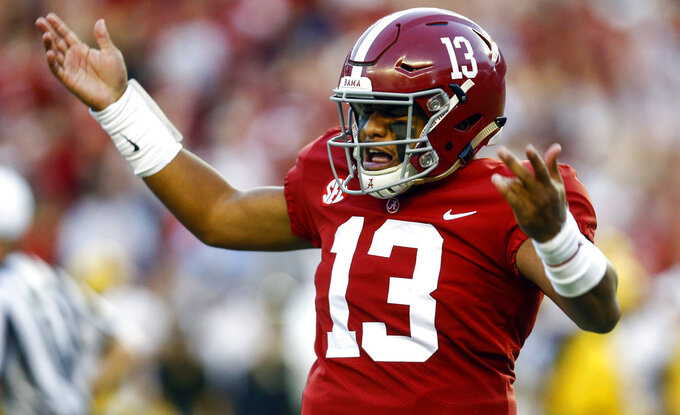 Alabama quarterback Tua Tagovailoa (13) gestures after throwing a touchdown pass during the first half against Missouri in an NCAA college football game Saturday, Oct. 13, 2018, in Tuscaloosa, Ala. (AP Photo/Butch Dill)

Tagovailoa stayed on the ground for a while after sliding at the end of a run in the third quarter of the top-ranked Crimson Tide's game Saturday night against Missouri.

He trotted off the field but headed to Alabama's medical tent. His parents joined him in the tent.

Tagovailoa sprained his right knee last week against Arkansas but coach Nick Saban said he didn't miss any practice time. Saban said Tagovailoa could have returned and wanted to.

Wide receivers Henry Ruggs III and DeVonta Smith suffered apparent leg injuries. Smith didn't return in the second half after a 57-yard catch. Ruggs appeared to have his right leg twisted by a Missouri defender on a tackle and walked to the locker room, but returned to the game.

Smith pulled a muscle, Saban said, and could be questionable against Tennessee.