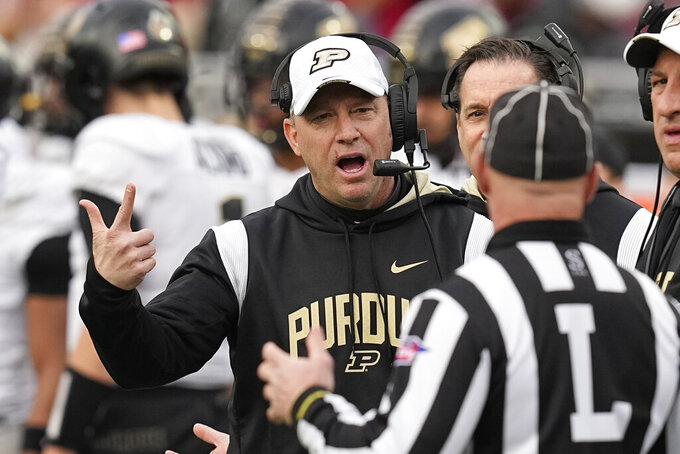 LOUISVILLE, Ky. (AP) — Louisville is finalizing a deal to hire Purdue’s Jeff Brohm as its head coach, a person with knowledge of the situation told The Associated Press on Wednesday.

The person spoke on condition of anonymity because the agreement and an announcement from the schools had not been finalized. The university scheduled a news conference for Thursday “regarding the football program’s leadership.”

Brohm, 51, would replace Scott Satterfield, who abruptly left the Cardinals on Monday after four seasons to become Cincinnati’s coach. Brohm, a Louisville native and former Cardinals quarterback, is 66-44 lifetime as a head coach and 36-34 at Purdue, which he guided to the Big Ten Conference West title this season before the Boilermakers (8-5) lost to No. 2 Michigan in the conference championship game.

The Boilermakers are headed to the Citrus Bowl a season after winning the Music City Bowl.

Brohm was immediately mentioned as a possible replacement after Satterfield’s stunning departure, just as he was in 2018 after the school fired Bobby Petrino following a 2-8 start and eventual 2-10 finish. At the time, Brohm was just two seasons into his tenure at Purdue and turned down his alma mater to continue building that program.

But with the Louisville job open again, Brohm accepted this time.

During a Monday news conference, athletic director Josh Heird said he believes Louisville is “not there” in terms of being one of the country's best programs. He added that it could be and wanted to find someone who wanted to be there for the long term — a box that Brohm checks off given his ties to the city and state.

“I think programs are built on continuity,” Heird said. “And in order to create that continuity, you have to have a leader who wants to be here for a long time.”

Louisville finished the regular season 7-5, with a 4-4 record in the Atlantic Coast Conference. The Cardinals have mostly fluttered around the middle of the conference standings in the years after Lamar Jackson led the team to a 7-1 conference record in 2016, when he won the Heisman Trophy.

Louisville was 25-24 under Satterfield, who will not coach the team in the Fenway Bowl on Dec. 17. Coincidentally, the Cardinals will face Cincinnati, but without Satterfield on the sideline for his new team. Deion Branch, Louisville’s director of player development, will guide the team on an interim basis for the bowl game.

Brohm passed for 5,451 yards and 38 touchdowns at Louisville while going 15-10 as a starter. He played eight seasons in the NFL and XFL before returning to become quarterbacks coach with the Cardinals under Petrino and Steve Kragthorpe, eventually becoming offensive coordinator.

Brohm reunited with Petrino at Western Kentucky and succeeded him there after Petrino returned to Louisville in 2014 for a second stint. His greatest coaching success came in Bowling Green with the Hilltoppers, who went 30-10 from 2014-16 with three bowl wins and a No. 24 final ranking in 2015.

While Louisville’s recent performance pales in comparison to where Brohm currently has Purdue, former Cardinals coach John L. Smith believes Louisville is an appealing program with potential to for improvement. With Brohm, the school gets someone who's familiar with the culture, tradition and success that he helped build as a player and coach.

“It’s a great job,” said Smith, whose background includes stints at Michigan State and Arkansas. “The league you play in is a great league and if you coach your tail off, you can win.

“I think for Jeff coming in, he’s got another appeal because he’s a hometown guy. He wants to probably come home, and he’d be a great fit.”