BC QB Phil Jurkovec has hand surgery, season in doubt 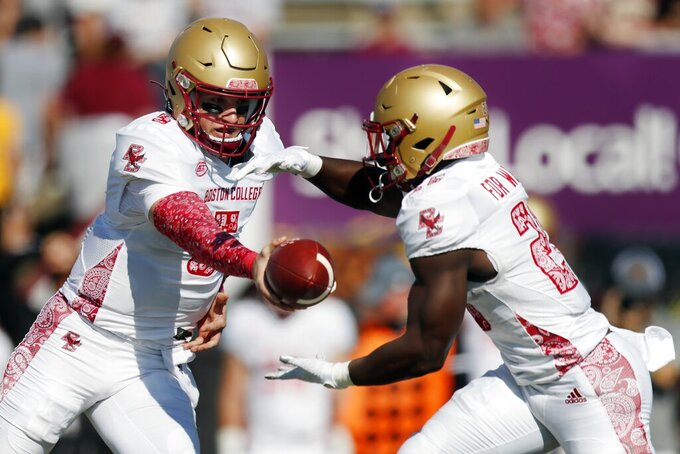 Boston College quarterback Phil Jurkovec (5) passes off to running back Alec Sinkfield (26) during the first half of an NCAA college football game against Massachusetts, Saturday, Sept. 11, 2021, in Amherst, Mass. (AP Photo/Michael Dwyer)

BOSTON (AP) — Boston College quarterback Phil Jurkovec underwent surgery for a hand injury that knocked him out of this weekend’s game against UMass and “could potentially miss the remainder of the year,” the school said Monday.

BC also said kicker Aaron Boumerhi is out for the season with a hip injury.

Jurkovec was the ACC co-quarterback of the week for Sept. 7, when he completed 16 of 24 passes for 303 yards and ran for 61 more in a 51-0 victory over FCS Colgate. It was his fifth career 300-yard passing game.

Against UMass on Saturday, the Notre Dame transfer completed three of four passes for 22 yards before he headed to the locker room late in the first quarter. Dennis Grosel replaced him and passed for 199 yards and a touchdown to help Boston College beat UMass 45-28 to improve to 2-0.

Jurkovec’s 2,558 yards in his first 10 starts were the most by any BC quarterback in school history. He is the first Eagles QB with at least four 300-yard games in a season since Matt Ryan in 2007.

Boumerhi, the Eagles’ starting place-kicker the last two seasons, was injured during the preseason and will not be able to return, the school said. He converted 16 of 20 field goal attempts last season.