Bring on the Irish: A historic game between the hedges 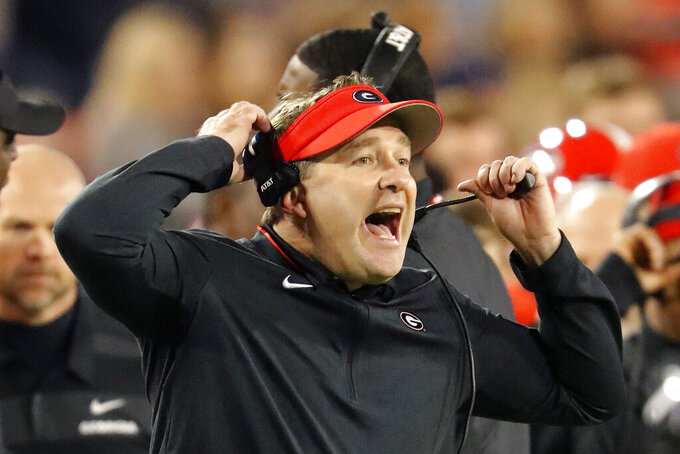 FILE - In this Nov. 17, 2018, file photo, Georgia head coach Kirby Smart reacts on the sideline during the second half of an NCAA college football game against Massachusetts in Athens, Ga. Notre Dame and Georgia. Two of college football's most storied programs meet for the first time in one of its most famed settings, a game that already feels special because of its historic ramifications but is also likely to have a huge impact on this year's race to the College Football Playoff. (AP Photo/John Bazemore, File)

ATHENS, Ga. (AP) — The Georgia players know it's a big game. They can read the polls. They can hear all the chatter around campus.

That doesn't mean they're well-versed on Notre Dame's storied past.

"That rings a little bit more of a bell," Wolf said, dropping his head and chuckling a bit but offering no further details.

"Yeah, I've seen 'Rudy,'" he shot back quickly, clearly proud of himself for knowing at least the Hollywood version of a revered chapter in Fighting Irish history. "Some people say they cry at the end. I was never one to get too emotional, but it's a good movie."

Of course, it won't be a history class they're taking Saturday night.

It's a football game that could have reverberations all the way to the College Football Playoff.

No. 3 Georgia (3-0) will host No. 7 Notre Dame (2-0) for the first time between the hedges (a.k.a. Dooley Field at Sanford Stadium), a showdown that has been eagerly anticipated in these parts pretty much since the series was announced five summers ago.

"It's going to be electrifying in that stadium, that's for sure," said former Georgia coach Vince Dooley, whose name was officially added to the massive facility less than two weeks ago.

It will be only the third meeting between these famed programs.

The first came at the 1981 Sugar Bowl, when a Georgia team coached by Dooley and starring Herschel Walker sealed what remains the school's only consensus national championship with a 17-10 victory over the Fighting Irish.

For Dooley, who grew up attending Catholic schools in Mobile, Alabama, and listening to Fighting Irish games on the radio, all while dreaming of playing in South Bend, the significance of beating the school of Knute Rockne and the Gipper only added to the celebration nearly four decades ago.

"The main thing was playing for the national championship," the 87-year-old Dooley recalled Monday. "We would have been happy playing anybody. But especially Notre Dame."

Two years ago, the teams met for the first time in South Bend. Under the gaze of Touchdown Jesus, the red-clad Georgia fans stormed into town by the thousands to cheer the Bulldogs to a 20-19 victory that signaled the beginning of their return to national prominence under coach Kirby Smart.

Georgia went on to capture the Southeastern Conference title and make it all the way to the national championship game, where the Bulldogs lost to Alabama in overtime.

Smart refused to discuss Notre Dame through the first three weeks of the season, which proved to be little more than a run of glorified scrimmages. The Bulldogs romped past Vanderbilt, Murray State and Arkansas State by a cumulative score of 148-23.

Now, finally, he's ready to talk about the Fighting Irish.

"It's a great game to have, a nonconference game you play at home and a school with such a tradition as Notre Dame," the fourth-year coach said. "I know a lot of Georgia fans have had this one marked on the schedule for a long time. So have a lot of Notre Dame fans."

Georgia is even bringing in some extra seats, adding temporary aluminum bleachers accommodating 500 people in the west end zone plaza that will ensure a record crowd of more than 93,000.

They probably could've sold another 100,000 tickets for this one, judging by the demand on the secondary market. As of Monday, the asking price on StubHub for the priciest set of lower-level tickets was $4,750; even the worst of the nosebleed seats, way up in the third level, were going for nearly $300 apiece.

Notre Dame is used to being the biggest game every place it goes.

Coach Brian Kelly said it won't be an issue to get ready for the frenzied setting in Athens.

"We'll work on it during the week," he said. "We have an indoor facility ... we can make that as loud as we want it to be. It will be hot here, too. The weather will be warm. There won't be any excuses relative to acclimatizing to the weather conditions. We'll prepare them for all of those."

While Smart knows the Georgia fans are especially pumped for this game, he's trying to pass on the same sense of urgent normalcy he has every week.

"As far as the stage, the biggest thing you can do is let your players relax and play," he said. "The team that over-analyzes it and hypes it up and makes it bigger than it is, larger than life, sometimes that gets you in trouble. We've played in a lot of big games. We've got a lot of people in our team room and in that building that have played in big football games. So they're not going to be intimidated by that."

Notre Dame hasn't won a national title since 1988. In recent years, the Irish have been blown out in some of their biggest contests, such as a 42-14 drubbing by Alabama in the 2013 BCS championship game and a 30-3 loss to Clemson in the semifinals of last season's College Football Playoff.

But Notre Dame continues to hold a special place in college football.

That hasn't changed at bit.

"Well, people either love them or hate them," Dooley said. "They've always got interest, regardless of what it is."