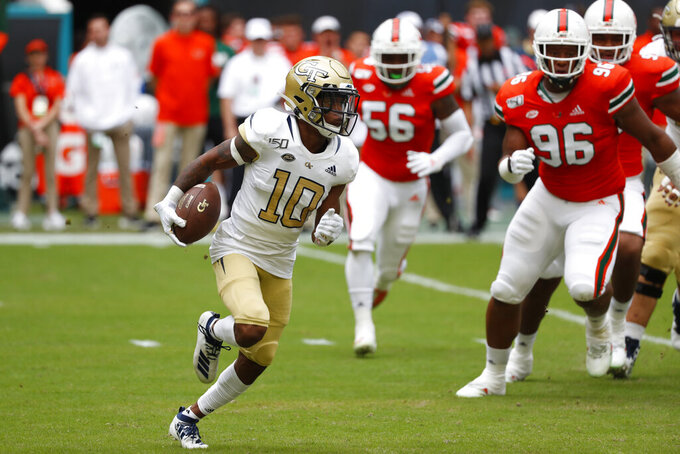 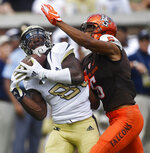 ATLANTA (AP) — Georgia Tech is taking its time deciding on a starting quarterback.

Coming off a tumultuous year on offense, the Yellow Jackets are still young and uncertain as they consider sophomore incumbent James Graham and three others for the job.

Maybe it's wise to avoid making an early declaration amid the coronavirus pandemic. With the scheduled season opener over three weeks away at Florida State and after the team's first padded practice Wednesday, Georgia Tech coach Geoff Collins is in no hurry to finalize the depth chart coming off a 3-9 debut season.

“They’ve got a good relationship with each other, but you know they’re really fighting and really trying to position themselves in a spot where they can lead this program,” Collins said. “Been really proud of all of them and excited to see in the next week and a half this thing unfold.”

Redshit freshman Jordan Yates and true freshmen Tucker Gleason and Jeff Sims are Graham's competition, but Graham, who started the final eight games last year, has the edge in experience as the team prepares for its first scrimmage later this week.

Regardless who starts at quarterback, Georgia Tech's offense has nowhere to go but up.

Among 130 FBS schools, the Yellow Jackets ranked worst in the red zone, fourth-worst in average total yards, sixth-worst in third-down percentage and seventh-worst in passing. They had two playmakers — running back Jordan Mason and slot receiver Ahmarean Brown — who made a difference, but Graham otherwise had limited options.

Graham completed just 45.1% of his passes, last in the Atlantic Coast Conference for QBs with at least 40 attempts. He still has plenty to work on.

“Transitioning in the pocket and my feet and just being on time with my throws, being able to read defenses and rotations,” Graham said. “Just the fronts and being able to check to the run game or the pass game, learning from my mistakes. I believe my biggest downfall is my footwork and I’ve been working on that all summer. You guys will see.”

“The weaknesses for all of the guys is that they’re young,” Patenaude said. "Even James ... is a young guy. From a football standpoint, he was a redshirt freshman last year who had never run that type of offense and had a huge learning curve and just happened to get thrown out there against really, really good ACC teams and figure it out on the fly."

Wideout Jalen Camp returns from surgery that ended his season after four games. Receivers Malachi Carter and Adonicas Sanders are back after earning starts last year, but sophomore Marquez Ezzard, a transfer from Miami, figures to earn plenty of snaps, too.

“He can be an unbelievable player for us on the outside,” receivers coach Kerry Dixon said. “He has great ball skills. His initial quickness is like no other. He’s studying the game. He’s starting to take from teaching and show it on the field.”

Brown, who tied Calvin Johnson's school record with seven touchdown catches by a freshman, has added muscle to his 5-foot-10, 170-pound frame and worked to add strength to his hands. His 21 catches covered a robust 18.9 yards.

“I’ve put on a good amount of weight to feel comfortable going across the middle catching things and playing a bigger role in this offense,” Brown said.

Running back Jahmyr Gibbs, a freshman from Dalton, Georgia., and the star of the most recent recruiting class, is the new, exciting name. Patenaude told an anecdote about Gibbs running a sideline route in a recent practice, jumping over a defender and keeping his foot in bounds.

“That guy's a special player now," Patenaude said. "He brings a different dynamic to that set. He's very dynamic out of the backfield.”

Patenaude plans to find plenty of ways to get the ball into Gibbs' hands.

“We are extremely lucky to have him here, and he's going to bring a dynamic piece of the offense that we didn't necessarily have last year,” Patenaude said.