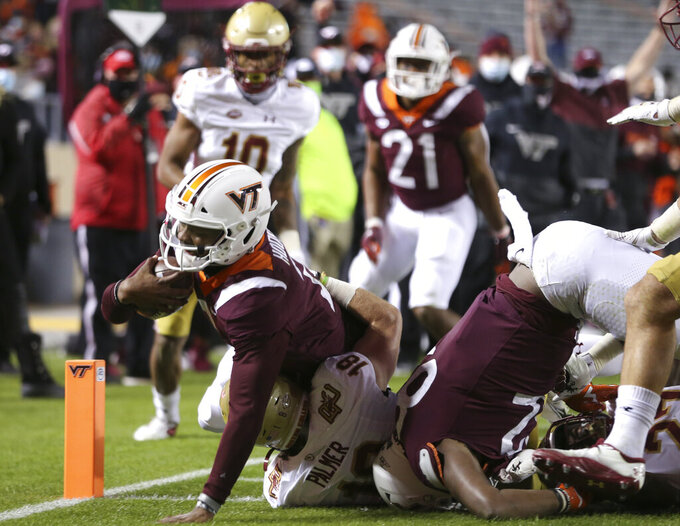 Now that Louisville has ended its losing streak the Cardinals are focused on their next challenge: winning consecutive games.

The Cardinals (2-4, 1-4 Atlantic Coast Conference) were able to breath a sigh of relief after a 48-16 pummeling of Florida State to snap a four-game slide. To mount a modest winning streak Louisville needs to get past Virginia Tech (4-2, 4-2) in Saturday’s inaugural ACC meeting between the teams.

Winning seems to have given the Cardinals new motivation.

Louisville made quite a few plays against FSU, averaging 9.3 yards per snap while rolling up 569 on offense. The defense yielded 406 but registered two sacks, an interception and its second-lowest point total this season.

“Anytime you make a couple of plays, that builds your confidence,” defensive coordinator Bryan Brown said of his secondary. “That’s one thing we’ve been looking for, guys taking chances and understanding where their help is. That’s what the guys have been doing these last couple of games, and it’s a thing of beauty to see.”

Those efforts will come in handy against a Tech squad looking to rebound from a mistake-marred 23-16 loss at Wake Forest. Interceptions thrown by Hendon Hooker killed two deep drives and the final possession, knocking the Hokies out of the rankings from No. 19.

“We stress about (going) 1-0 all the time,” Tech tight end Nick Gallo said. “I always thought about it as don’t look too far in the future, but coach (Justin) Fuente would also say it’s not looking too far behind you. We’re just trying to get back on track and go 1-0, basically.”

Some other things to watch as Virginia Tech visits Louisville:

Louisville quarterback Malik Cunningham has completed 63% of his passes for 1,396 yards, 12 touchdowns and just five interceptions. Other than a dreadful, sack-filled effort at Pittsburgh, the junior has hit at least 57% of his attempts, including a 16-of-19 effort that kept the Cardinals close at Notre Dame. Cunningham became the ninth Louisville player to reach 5,000 yards of offense by throwing for 278 of his 318 yards from scrimmage against FSU.

Virginia Tech features the ACC’s top ground game (291.6 yards) thanks to senior Khalil “Juice” Herbert. He leads the nation in all-purpose yardage with 217.6 per game and ranks third in rushing average at 131.2 yards. Herbert also has 318 yards on kickoff returns.

Louisville enters the game second nationally with 28 pass breakups, including a school-record 12 last week against FSU. Anthony Johnson capped the win by breaking up a pass on the Seminoles’ final three plays to become the first Cardinal to do so. Cornerback Kei’Trel Clark had two in the contest and ranks third in FBS with seven breakups.

Virginia Tech has 18 sacks and presents a challenge for a Louisville offensive line that has allowed 15, including seven at Pitt. The Cardinals yielded just one against FSU.

The schools are meeting for the first time since the 2006 Gator Bowl that Virginia Tech won 35-24. The Hokies lead the series 5-2, though Louisville is 2-1 at home against them and won the last regular season matchup 21-17 in October 1992.