No. 13 UCF opens conference play with trip to East Carolina 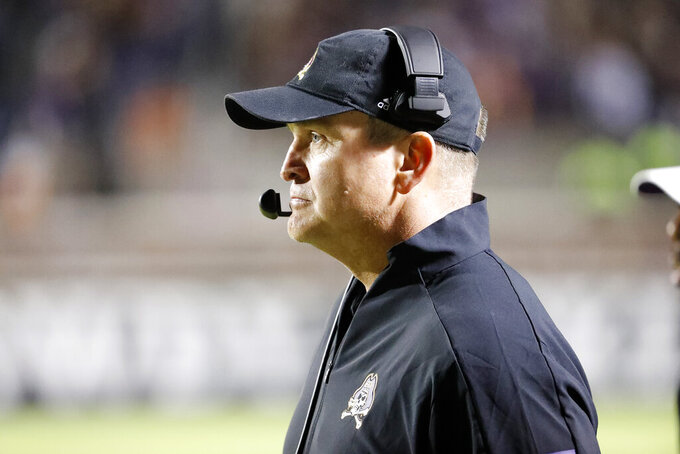 East Carolina head coach Mike Houston looks from the sidelines against Cincinnati during the first half of an NCAA college football game in Greenville, N.C., Saturday, Nov. 2, 2019. Houston opens his second season with the Pirates on Saturday, Sept. 26, 2020 against No. 13 UCF. (AP Photo/Karl B DeBlaker)

Dillon Gabriel and and his Central Florida teammates aren’t spending time worrying about their national ranking. Instead, the No. 13 Knights just keep piling up wins.

UCF opens American Athletic Conference play Saturday with a trip to East Carolina, looking for its 37th win in 41 games dating to the start of the 2017 season. The Knights are coming off a 28-point road win at power-conference foe Georgia Tech, a strong start for the preseason AAC title favorite.

The Yellow Jackets were coming off a comeback road win at Florida State, prompting Gabriel to note afterward: “I guess you can say we’re the best team in Florida.”

But the Knights (1-0) moved up only one spot in the AP Top 25, trailing No. 5 Florida and No. 12 Miami from the Sunshine State, as they enter a second straight road game to start the schedule.

“From the whole COVID thing, I’ve realized you can only control what you can control," Gabriel said. "All we can control is beating the team in front of us. We’ve got ECU this week, so that’s all I’m focused on.”

The Pirates, meanwhile, are glad just to be finally playing a game.

They were originally scheduled to open Mike Houston’s second season by hosting Marshall on Aug. 29, though that game was pushed back to Sept. 12 – and then postponed again to a to-be-determined date after the Pirates had to pause football activities in August due to a coronavirus cluster.

“We’ve had the whole start-stop, all that stuff, since we started preseason camp,” Houston said. “But I think what we’ve all seen across the country the last couple of weeks is that you can play college football this year. And finally it’s our turn.”

Some other things to know about Saturday’s UCF-ECU game:

East Carolina ranked as one of the worst defenses in the Bowl Subdivision ranks last year, allowing 33.7 points and 469.3 yards per game. The Pirates brought in Blake Harrell in January as the new coordinator for a unit with five returning starters — none on the line — and a date with a team that amassed 660 yards in its opener.

Gabriel threw for a career-best 417 yards and four touchdowns while showing he also has the ability to scramble and make positive plays when necessary in the season-opening victory.

“Dillon’s feet are a weapon for us,” UCF coach Josh Heupel said, saying he expects the second-year starter to get better and better in those situations.

“I think from where he started a year ago, and his comfort level and understanding of just how to play the game and when it’s the right time (to run), those are all things that take time,” Heupel said.

UCF’s defense forced five turnovers and blocked a field goal at Georgia Tech. That came after closing out last season with five takeaways against Marshall in the Gasparilla Bowl.

“It’s something we practice every day. We make a point of it,” assistant head coach and secondary coach Willie Martinez said. “It’s really our motto on our entire team about being on attack, and the ball being the important piece of it.”

The Pirates will need their offense to start quickly.

Junior quarterback Holton Ahlers is a two-way threat who threw for 21 touchdowns and ran for six more. He showed his upside last year by throwing for a school-record 535 yards with four touchdowns while also running for a score in a shootout loss to a ranked Cincinnati team.

In last year’s meeting, the Knights scored touchdowns on their first five drives to lead 35-3 by midway through the second quarter.

This is East Carolina’s latest opening game since the 1947 season.

“I wish we had some game experience coming into this game,” Houston said. “At the same time, there’s probably still a little bit of unknown about us as far as UCF goes, whereas we have a little bit of confirmation on what we thought we were going to see when we saw them play.”