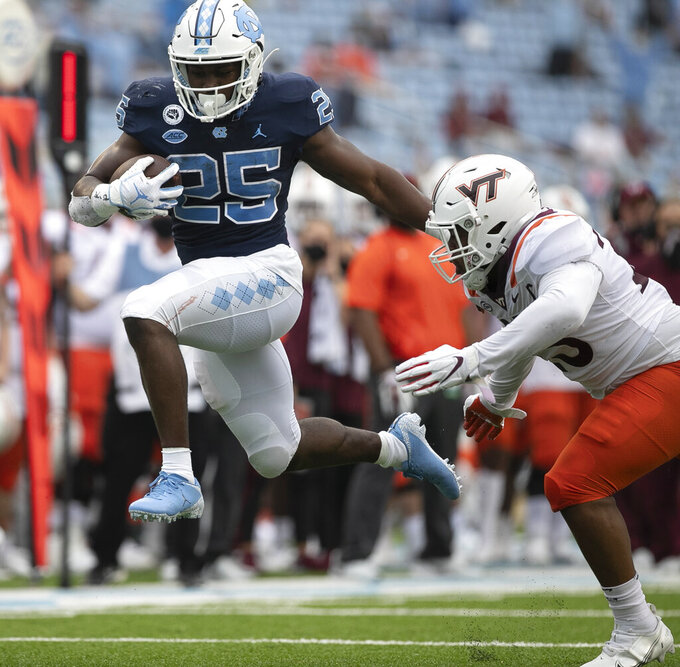 Notre Dame has won 14 consecutive games dating to last season and is closing in on a spot in next month’s ACC championship game after its win against then-No. 1 Clemson on Nov. 7. Friday's trip to North Carolina represents the toughest game remaining on the Fighting Irish’s regular-season schedule, with the Tar Heels having climbed all the way to No. 5 in the AP Top 25 last month. UNC is trying to keep its hopes alive of reaching the ACC title game with two league losses.

Notre Dame’s defense against North Carolina’s offense. The Fighting Irish have been one of the nation’s best defensive teams, allowing just 85.1 yards rushing (fourth in the Bowl Subdivision ranks), 304.1 total yards (ninth) and 16.6 points (11th). The Tar Heels have the ability to move the ball through the air and on the ground for big gains. Quarterback Sam Howell is in the top 10 nationally in passing yardage and passing touchdowns, while both Javonte Williams and Michael Carter are averaging at least 100 yards rushing. UNC ranks fourth nationally in total offense (563.4) and 10th in scoring (43.1).

Notre Dame: Jeremiah Owusu-Koramoah is a senior rover with 4.4 speed who did not record a tackle against Boston College, but he will be a big part of the Irish’s push to slow the Tar Heels. He ranks third on the team with 35 tackles, with a team-best 8 1/2 for loss. In the 47-40 double-overtime victory against Clemson, Owusu-Koramoah had nine tackles and returned a fumble for a touchdown.

UNC: Dyami Brown ranks among the national receiving leaders. The junior is tied for eighth in the FBS with eight touchdown catches, as well as 19th by averaging 103.6 yards per game. He’s at his best stretching the field vertically for Howell.

Notre Dame’s last loss came at Michigan in October 2019. … Notre Dame is 31-3 since the start of the 2018 season. … This is UNC coach Mack Brown’s first game against Notre Dame in his 32-year career as a head coach, as well as the first meeting between Brown and Fighting Irish coach Brian Kelly. … UNC has lost eight games since the start of Brown’s second stint with the Tar Heels last year. All have been by seven or fewer points. … The Tar Heels rallied from 21 down in the third quarter to beat Wake Forest in their last game (Nov. 14), with Howell throwing for program records of 550 yards and six touchdowns. … Notre Dame quarterback Ian Book made his first career start in a 33-10 win at North Carolina in October 2017. … The Tar Heels beat the Fighting Irish at home in 2008 for one of their two wins in the series, though it was later vacated due to NCAA sanctions.