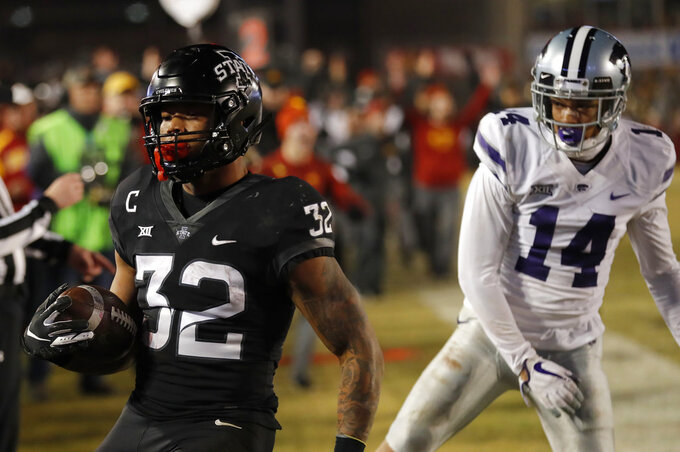 AMES, Iowa (AP) — No matter that the opponent is a small private school with an FCS team that does not offer athletic scholarships.

Iowa State coach Matt Campbell and his players are just happy to be playing a 12th game.

The No. 24 Cyclones will host Drake on Saturday to replace the season opener with South Dakota State that was called off because of lightning after just a few plays. Drake (7-3), a perennial contender in the Pioneer Football League, also had its opener scrubbed because of weather.

"You only get guaranteed 12 opportunities," Cyclones tight end Sam Seonbuchner said Tuesday. "You grind all year, you want to be able to take advantage of every opportunity and have all of those opportunities."

The tendency is to view the game as little more than a scrimmage for an Iowa State team that tied for third in the Big 12 and is heavily favored.

Campbell doesn't see it that way.

"To me it's not like you're playing a spring game or something like that," he said. "You're going to play a game against an opponent that will come in here, their kids are going to want to play and what a great opportunity for them and us. So I think the reality of it for us is we're treating it just like we would any other football game."

The game would seem to offer Campbell a chance to give his younger guys some playing time that might prove valuable down the road. But he insisted he has not mapped out any scenario for working those players into the game and is more concerned about how the team as a whole develops, especially with a bowl game on the horizon.

So if he feels quarterback Brock Purdy or running back David Montgomery need more work, he'll give it to them.

"I think sometimes this time of year you see teams go the other way. You want to be trending in a positive direction and I think that's what's so significant about the week of prep and the game and moving ourselves forward."

Iowa State originally had scheduled Incarnate Word for its 12th game. But Incarnate Word made the FCS playoffs, so athletic director Jamie Pollard had to look for another opponent.

Drake, located 35 miles south on Interstate 35, readily agreed to play. ," Drake senior defensive lineman Nathan Clayberg called it "about as much of a dream come true as you could possibly imagine" as the Bulldogs prepare for a game in front of as many as 60,000 fans.

"All I said is I would like have liked to play a 12th game no matter how it came up. Obviously, who and what and how, I had zero say in any of that," Campbell said. "I just appreciate that Jamie was able to get a 12th game for our football team because again, that's what's really tricky about college football. You only get 12 guaranteed games."

Iowa State and Drake have a long history, having played each other 69 times. The most recent game was in 1985, when Drake upset the Cyclones 20-17 in Ames.

"Just happy to get another opportunity," safety Lawrence White said. "We thought last week was our last opportunity in Jack Trice, but we get one more and we just want to go out with a bang."