No drop-off: Bama loses a bunch of stars to NFL, still No. 1 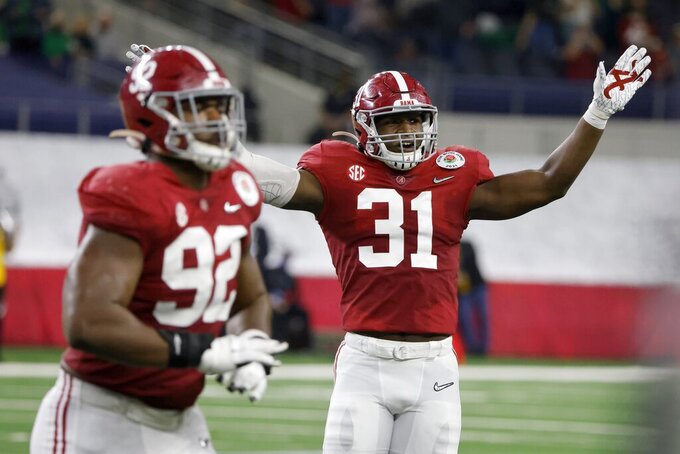 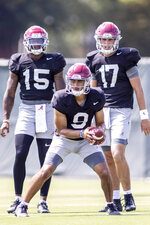 ATLANTA (AP) — In the circle of college football life, Alabama sends another hefty batch of future stars to the NFL and still begins a new season as the top-ranked team.

The No. 1 Crimson Tide will get an early read on the latest group of five-star recruits Saturday against No. 14 Miami at the Chick-fil-A Kickoff Game in Atlanta.

Alabama is coming off one of the greatest seasons in college football history: 10 straight wins against an SEC-only schedule, a shootout victory over Florida in the league championship game, and blowouts over Notre Dame and Ohio State in the College Football Playoff to earn coach Nick Saban his record seventh national title.

Saban, of course, has long since put 2020 in his rearview mirror. He said Miami “is a big game for our players to sort of establish the identity of what’s this team going to be.”

“It doesn’t matter what we’ve been in the past,” he added. "It’s all about what we do in this game.”

Alabama had a record-tying six players selected in the first round of the NFL draft, eight of the first 38 overall picks, and a total of 10 players who heard their names called.

Any other team would be in full rebuilding mode after such staggering losses — which included Heisman Trophy-winning receiver DeVonta Smith, star quarterback Mac Jones, dynamic running back Najee Harris and SEC defensive player of the year Patrick Surtain II.

But this is just business as usual at Alabama, which has built perhaps the greatest dynasty in college football history by hoarding many of the country's top recruits each year.

The Tide's offense is now led by sophomore quarterback Bryce Young, a highly touted Californian who'll be breaking in a new group of playmakers.

“I think the realistic approach is we have a lot of new players on offense, and it’s a work in progress to get all these players to develop to be productive and consistent performers,” Saban said. “We're working hard on that.”

Miami heads into its third season under coach Manny Diaz, who guided the Hurricanes to an 8-3 mark in 2020 but has yet to show he can compete consistently with the nation's top programs.

Miami's only victory over a ranked team came early in the season when the Hurricanes knocked off then-No. 18 Louisville, which wound up finishing 4-7.

The Hurricanes went 0-3 against their other Top 25 opponents, including blowout losses to ACC champion Clemson (42-17) and North Carolina (62-26).

It will be intriguing to see if Miami has made any progress when it faces the most elite program of all.

“All we have to do on Saturday is find a way to be one point better than they are," Diaz said. “They have accomplished a lot of things that have not been accomplished at historic levels in college football."

Some tings to watch for when Alabama faces Miami before an expected full house at 73,000-seat Mercedes-Benz Stadium:

If anyone is expecting a drop-off at quarterback after the loss of Jones, now starting for the New England Patriots, it's worth noting that Young is the highest-rated quarterback to sign with Alabama in the Saban era.

Before he even started a single game, Young already was raking in close to seven figures in endorsement money, according to Saban.

"I have confidence in the players that we have,” the coach said. “We just have players that don’t have as much experience as we had a year ago.”

Even though four Alabama receivers have been first-round draft picks in the last two years, the Tide is hardly hurting in that department.

John Metchie, who had 55 catches for 916 yards last season, will be joined by transfer Jameson Williams, a speedster from Ohio State. Freshmen Agiye Hall and Ja’Corey Brooks also are expected to make an immediate impact.

Receiver Mike Harley (57 catches, 799 yards) and tight end Will Mallory give King a couple of veteran targets. Charleston Rambo, a transfer from Oklahoma, could also play a big role in Miami's passing game.

King can beat you with his legs, as well. He's rushed for 32 touchdowns in his college career.

“It’s rare that you see a quarterback that can run as great as he can, and can pass and control the game,” Alabama linebacker Will Anderson Jr. said.

The one area where Miami might have an edge on the Crimson Tide is the kicking game.

Lou Hedley is one of the nation's top punters. If family ties are any indication, the placekicking duties should be in good hands with Andres Borregales.

“We feel like we have the best group of specialists in America,” Diaz said.

Miami is trying to do something no other Alabama opponent has managed since Saban arrived in Tuscaloosa:

Beat the Tide in an opening game.

Saban is 14-0 in openers with Alabama, winning by an average margin of nearly 29 points and more than doubling opponents in total yards.

The Tide has also won 14 straight games in Atlanta and is 6-0 in Chick-fil-A Kickoff games.