Notre Dame getting 1st title shot since '12 loss to Alabama 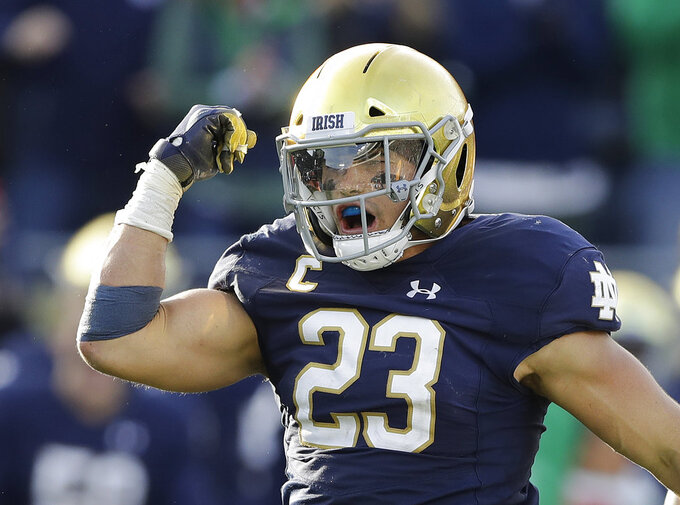 File-This Oct. 13, 2018, file photo shows Notre Dame linebacker Drue Tranquill celebrating after making a tackle during the second half of an NCAA college football game against Pittsburgh. Notre Dame defensive captain Tranquill and leading receiver Miles Boykin weren’t even Fighting Irish fans the last time they had a 12-0 regular season. Maybe that was a good thing since those current players didn’t have to suffer through how that season ended. (AP Photo/Darron Cummings, File)

ARLINGTON, Texas (AP) — Notre Dame defensive captain Drue Tranquill and leading receiver Miles Boykin weren't even Fighting Irish fans the last time they had a 12-0 regular season. Maybe that was a good thing because those current players didn't have to suffer through how that season ended.

The third-ranked Irish (12-0) are back in championship contention at the end of the season for the first time since a lopsided loss to Alabama in the national title game nearly six years ago. It has now been 30 years since the last of their eight AP national titles in 1988.

"That's something a lot of us take a lot of pride in, kind of bringing a new dawn to Notre Dame football in that tradition," Tranquill said.

"To see Notre Dame on that stage in '12 and to fall short, I think, was probably disappointing to a lot of fans, and certainly provided a lot of air of a lot of people who didn't like Notre Dame around the country," the senior linebacker said Thursday. "We're not trying to be '12. We want to be our own unique team."

Notre Dame is in the College Football Playoff for the first time, and will play its semifinal game Saturday against second-ranked Clemson (13-0) in the Cotton Bowl.

Boykin even admits that he was pulling for Alabama that January night in 2013 when the Crimson Tide beat Notre Dame 42-14 for their third national title in four years. Alabama has added two more since then.

"Not one of my proudest moments," said Boykin, who obviously has a different tone now with Notre Dame making its CFP debut.

"It's where we belong. We've been away far too long," he said. "It's unacceptable to be at a place like Notre Dame, and have the history that we have, and not be at a place like this. Everything that we talked about was we've got to put Notre Dame back on the map and change the narrative about us recently."

The Irish made it through this regular season undefeated while playing a schedule that included 10 teams from Power Five Conferences. That included a 36-3 win over then-No. 12 Syracuse at Yankee Stadium in mid-November before a win at Southern Cal on Thanksgiving weekend to reach 12-0 for only the third time in program history.

This is coach Brian Kelly's ninth season at Notre Dame. The only assistant coach that has been with Kelly the entire time is defensive line coach Mike Elston, and he is also the only assistant remaining from the 2012 season.

"The program's in as good as a place as it's been and I do believe that we're in a position to sustain it if we continue to recruit. Just signed a great class that will help us continue this trajectory," Elston said. "I do believe that this is a program that will sustain, and that we have all of the pieces in places to do that."

Still, there seems to be a lingering effect — at least outside the program — about that national championship game loss to Alabama, even though Nick Saban's squads have soundly defeated many opponents in his 12 seasons. Only the Crimson Tide have made the four-team playoff each of the five years in the CFP system.

Among the first questions asked of Kelly during Notre Dame's media session at AT&T Stadium on Thursday was how big a win in the Cotton Bowl would be to put that 2012 loss to rest.

"I put that to rest the next day. That's why we're back here, building our football team, to get an opportunity to compete for a national championship," Kelly said. "We are back here now. We've got to win a football game."

Kelley was then asked if a win would validate the Irish being back on the scene as one of the national powers. The coach's response was that they already are.

But these Irish aren't satisfied with just making the playoff.

"It's really important. This is our goal, this is what we worked for as a team, as a program, this is the pinnacle of college football and we're excited to be a part of it, but we've got a couple of more games to win," defensive lineman Jerry Tillery said. "This isn't good enough in this program. We want it all, so that's what we're going for."