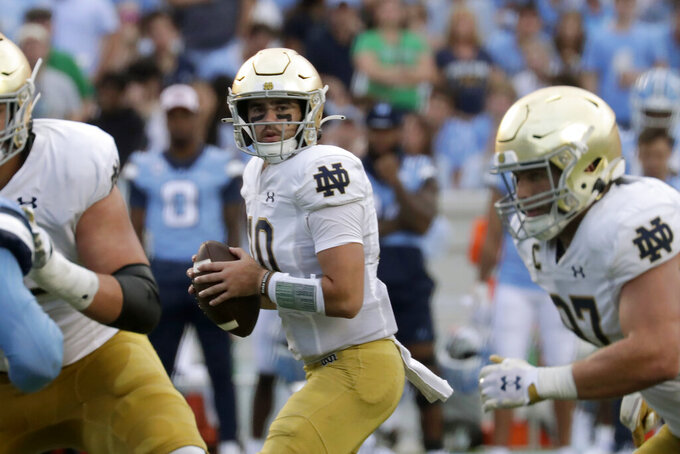 He's become the heartbeat of the program’s midseason turnaround.

While the preseason All-American is the clear leader in the tight end room, his productivity on the field has helped the Fighting Irish reel off three straight wins since starting 0-2.

“He’s still not a finished product, and that’s tough to say about a guy who's going to have every record for tight ends,” coach Marcus Freeman said. “He understands that, and he wants to be pushed.”

Mayer is a rare commodity in a football world where most tight ends specialize either in catching passes or blocking. The 6-foot-4, 265-pound junior excels at both.

He leads the Fighting Irish in all major receiving categories with 33 receptions, 351 yards and five touchdown catches, and has shown there's more to his game than flashy receptions. It makes him a matchup nightmare and explains why the Kentucky high school product could be the first tight end taken in next spring's NFL draft.

“Put a linebacker on him, it’s a plus for him. Put a safety on him, he better be really long," Irish defensive coordinator Al Golden said. “Put a nickel on him, you get bounced out of the bar. He’s a great kid. The thing everyone respects about Michael is he will do the dirty work.”

Yet he still leads all FBS tight ends in receptions per game (6.6) while ranking second in yards receiving per game (70.2 yards) and TD catches.

In Saturday's victory over No. 16 BYU, he broke the school mark for single-game receptions by a tight end, hauling in 11 catches for 118 yards and two TDs, while also breaking Notre Dame's career receptions record by a tight end.

He heads into Saturday's game against Stanford with 146 catches, 11 more than Tyler Eifert, and one TD short of tying the school mark for TD catches by a tight end.

How crucial is Mayer is to Notre Dame's success? He's only missed 22 snaps through five games, in part because the Irish lack play-making receivers on the outside.

Just a few weeks ago, the tight end room appeared thin. George Takacs had transferred to Boston College during the offseason, Kevin Bauman went down with a torn anterior cruciate ligament in Week 3, and Mitchell Evans and Cane Berrong are still rehabbing from injuries.

But quarterback Drew Pyne and offensive coordinator Tommy Rees have leaned heavily on Mayer and found some help. Run-blocking freshman Eli Raridon has given the once stagnant ground game a needed jolt, helping the Irish rush for 521 yards over the past two games.

“He has it,” Freeman said. “He has those traits that you’re looking for in a great tight end.”

Freshman Holden Staes also made an 11-yard catch on third down against BYU to keep a drive alive.

“Both of them have different skill sets that we’ve been able to mix and match here to really optimize the room,” Rees said, referring to Raridon and Staes.

Then there's Davis Sherwood, the linebacker turned tight end, who was awarded a scholarship in August because of his versatility and hard-nosed style. He can play fullback, contribute in short-yardage situations and even earned a start last weekend.

Together, they've given Pyne a plethora of options and now they're proving they can keep Notre Dame's offense running in sync.