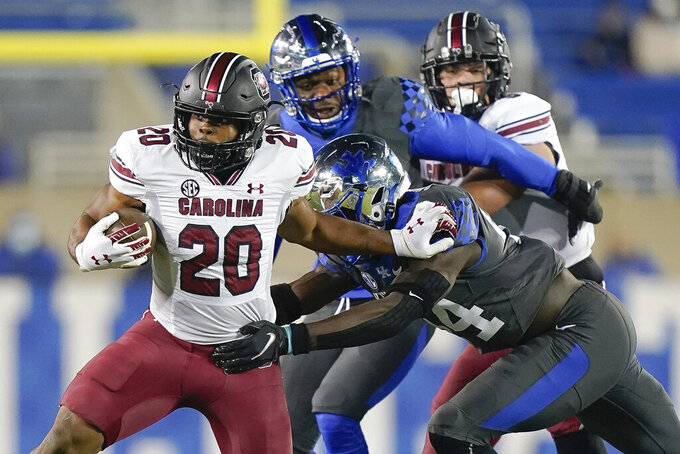 FILE- In this Dec. 5, 2020, file photo, South Carolina running back Kevin Harris (20) runs with the ball during the first half of an NCAA college football game against Kentucky in Lexington, Ky. Harris, rhe Southeastern Conference's leading rusher last year, is expected to play for the first time this season when South Carolina goes to East Carolina on Saturday. (AP Photo/Bryan Woolston, File)

COLUMBIA, S.C. (AP) — Kevin Harris is finally healthy enough to play college football again after his breakthrough season as one of the Southeastern Conference's top rushers.

Harris finished with 1,138 yards rushing and 15 touchdowns, leading the SEC with 113.8 yards a game last season. His touchdowns were second only in the league to Alabama's Najee Harris.

The 5-foot-10, 220-pound Gamecock was eager to keep that going this year. However, back surgery to correct what he and South Carolina coach Shane Beamer called a “minor procedure” led Harris to miss all of spring camp and much of the summer.

The tailback “looked good out there” for Tuesday's practice, Beamer said. "He'll help. It’s another back in the room.”

Harris was much more than just another back in the room last season; he was the brightest spot in an offense that was 10th in the SEC in both total yards and points.

He had five games with 100 yards or more last season, incuding a season high 243 against Mississippi and 210 against Kentucky. Harris became only the third South Carolina runner — Heisman Trophy winner George Rogers and Marcus Lattimore are the others — with multiple 200-yard rushing games.

“I'm feeling pretty good,” said Harris, who usually keeps his comments brief. “I want to do better than I did last year.”

Harris was scheduled to play in last week's season-opening 46-0 victory over Eastern Illinois, but an illness kept him on the sideline.

It didn't hurt South Carolina's running game much, gaining 254 yards including 128 from Zaquandre White and 63 from MarShawn Lloyd, who missed all of 2020 with an injury.

Harris' return makes things complete and gives the Gamecocks an added dimension going forward. Just this morning, Beamer joked the running backs meeting room sounded like a “frat party” with the joy they all took in knowing Harris would play.

“It's great to have all of us out there,” Lloyd said.

It hasn't been the easiest road for Harris to follow, Beamer said. Harris lives to compete and him missing the spring under a new coaching staff was difficult for him, Beamer explained.

“It would be easy to get frustrated,” the first-year coach said. “He wanted to play during preseason camp. He certainly wanted to be out there Saturday night” for the opener.

Harris understood the operation would correct a problem and make him more effective going forward.

“He had a big smile out there today,” Beamer said. “It was great to see him in full pads and running the football like we know he can.”

Harris is not the fastest runner, but one with an ability to hit the right hole and cut into the open field. He had 31 of South Carolina's 51 runs of at least 10 yards in 2020, including four TD runs of 44 yards or longer.

Harris showed that versatility against Vanderbilt last season. He escaped a pair of Commodore defenders for a 25-yard touchdown run then capped his game with an 88-yard score, bursting through the line and finding the clear path to the end zone.

“We know the kind of runner he is,” Beamer said.

There's no medical restriction on Harris limiting his carries. Although Beamer, offensive coordinator Marcus Satterfield and running backs coach Mario Hardesty will put their heads together this week about keeping Harris as fresh as possible throughout.

Satterfield was impressed with Harris' ability when he could practice. Satterfield didn't know Harris was in and was wowed by what he saw. “I had to do a double take,” Satterifled said.

“You can tell he's ready to run,” Satterifield said.