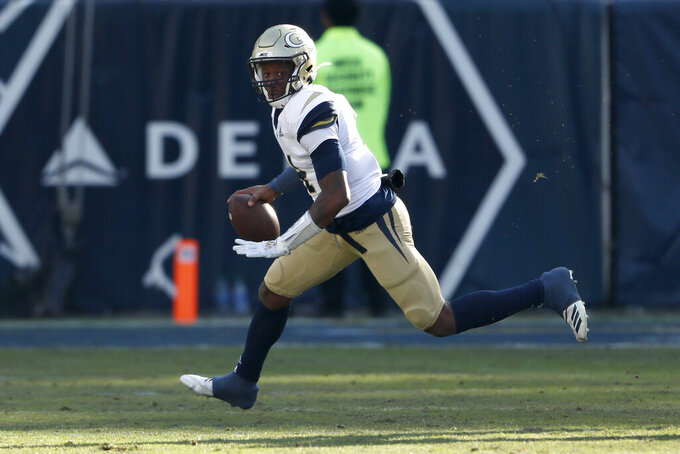 Georgia Tech quarterback James Graham (4) scrambles as he looks for an open receiver in the first half of an NCAA football game against the Virginia Tech Saturday, Nov. 16, 2019, in Atlanta. (AP Photo/John Bazemore)

At this point, resiliency and hope for a better future may be the only sources of comfort for either last-place team.

The Wolfpack have suffered four straight losses, each by at least two touchdowns. They are tied with Syracuse for last place in the ACC’s Atlantic Division.

The Yellow Jackets have lost three straight games and are alone in last place in the Coastal Division.

A home loss to The Citadel on Sept. 14 looked like Georgia Tech’s low point of the season before it was held to 134 yards in last week’s lopsided 45-0 loss to Virginia Tech.

For once, it was impossible for the optimistic Collins to deliver his usual upbeat lines about his team improving every week.

Instead, Collins said Tuesday “I don't know if we played our brand of football on Saturday.”

Each team has been forced to rely on young players.

N.C. State coach Dave Doeren has had no senior starters on offense for three straight games. He has played 18 true freshmen and has lost seven players, including five starters, to season-ending injuries. Five more starters have missed two or more games.

Some other things to know about Thursday night’s North Carolina State-Georgia Tech matchup:

Doeren isn’t happy his team’s schedule includes the Thursday night road game after a 34-20 loss to Louisville on Saturday night. He said the quick turnaround “is really challenging on the staff and the players.”

He said the short practice week is made more difficult “when you’re dealing with injuries and health and also just fatigue.”

N.C. State has won its last five games against teams from the Coastal Division. The Wolfpack’s last loss on the road to a Coastal Division team was in 2015 at Virginia Tech.

STEP BACK FOR GRAHAM

Georgia Tech quarterback James Graham struggled with two interceptions against Virginia Tech. For the second time in three games, he said he didn’t prepare himself properly.

Collins said “I think the world of James” despite the inconsistency of the redshirt freshman.

“It's just the evolution of a player,” Collins said. “... There's going to be some hills and valleys, ups and downs.”

Perhaps the highlight for Georgia Tech fans against Virginia Tech was the first chance to see freshman Jordan Yates see significant time behind Graham. Yates’ only previous playing time came on a two-point play against Duke.

Graham completed only 4 of 11 passes for 38 yards but looked comfortable making decisions on run-pass option plays. Collins said Yates “provided us a spark” and said he isn’t worried that giving the freshman more time could impede Graham’s development.

N.C. State has forced only five turnovers to rank last among 130 teams in the NCAA statistics. That includes no forced turnovers in ACC games. “I’ve never been through a stretch like this where we’re not getting the ball back,” Doeren said.

The Wolfpack’s last opponent to lose the ball was Ball State on Sept. 21.

Meanwhile, North Carolina State has lost 11 turnovers in its four-game losing streak, leading to 59 points for its opponents.