Army ponders how long it can remain independent in football 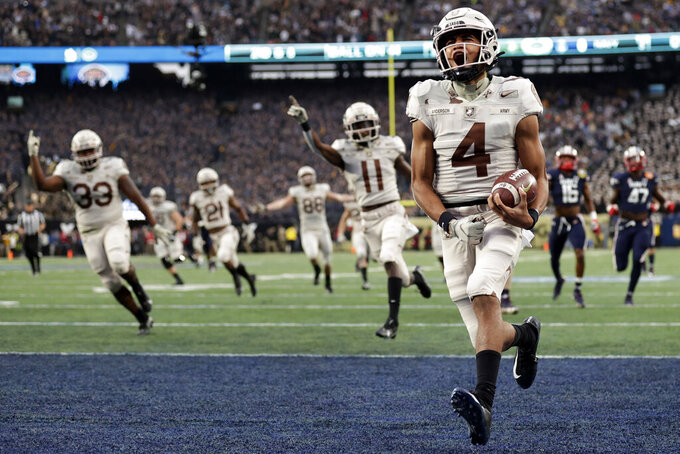 FILE - Army quarterback Christian Anderson (4) reacts to scoring a touchdown against Navy during the first half of an NCAA college football game on Dec. 11, 2021, in East Rutherford, N.J. Army needs to beat Navy this Saturday, Dec. 10, 2022, at Lincoln Financial Field in Philadelphia to avoid just its second losing season since 2016. (AP Photo/Adam Hunger, File)

Army won only 13 games from 1998 to 2004, and only twice in the game that mattered most, the annual showdown with Navy. The move was a bust and Army, whose storied history dates to 1890, retreated back to life as an independent.

Nearly two decades later, college football -- college sports, overall -- has exploded with change, with players having more opportunities to earn money than ever before and more power to determine where they play. Billion-dollar media rights deals for the biggest leagues amid realignment have become the benchmark.

The question considered at Army at the end of each season: Would moving to a conference and the chance at greater financial stability and exposure the program could use again be worth the loss of its independence?

“The realignment certainly gets your attention,” Army athletic director Mike Buddie said. “We weigh that option every year. We value our independence so much, it just hasn’t made sense for us up to this point. But the shifting tides of conference realignment, expanded college football playoff, all those things could play a factor in re-evaluating.”

Monken also stopped Navy’s 14-game winning streak in the series and led the Black Knights to three straight wins in the series from 2016-2018. Army last won in the series -- which resumes Saturday at Lincoln Financial Field, home of the Philadelphia Eagles -- in 2020.

The 55-year-old Monken was a strong candidate last season at Kansas and has been a top name on the rumor mill -- Purdue has an opening right now -- to take a higher-tier job each of the last few years.

Army plays what’s considered a national schedule. Yes, games against Navy and Air Force will never go away but the Black Knights played teams as varied this season as Villanova to nationally-ranked Wake Forest. Monken understands the challenges that come with coaching at a service academy as well as anyone and that the evolving state of the sport may at some point force Army’s hand.

“I like the fact that we are able to play a number of different teams each year and that the schedule changes,” he said. “We can play teams from all over the country and have the flexibility to play Power Five teams. I think there’s a value to that. But at some point, it may be unavoidable. For right now, I like where we’re at.”

Army's other sports programs, such as basketball, play in the Patriot League. Air Force hasn't been an independent since 1979 and plays in the Mountain West. Navy (4-7) joined the American Athletic Conference in 2015 and had mixed success.

“If you take a look at why we joined a conference, it’s working,” Navy athletic director Chet Gladchuck said. “We have access to qualifying for bowl games, we have a great television package, we’re getting a tremendous revenue share out of the conference, we have a voice in government with NCAA legislation. It’s brought us so many opportunities and opened so many doors for us.”

Army, Navy and Air Force are banned from offering endorsement deals to their athletes and most recruits at those schools aren’t in the market for them anyway. Buddie, a former major league pitcher, said NIL deals — payment for the use of an athlete's name, image or likeness — have had a “minuscule impact” on the program compared to other looming threats.

“We’re still taking kids that virtually don’t have any other Division I offers, other than Navy and Air Force, potentially,” Buddie said. “They’re not getting NIL discussions from other schools. Most of them have the perspective of understanding a degree from West Point is worth a heck of a lot more than $4,500 in free pizza. Now what it’s impacted is, some of our opponents' ability to get a lot better, quickly. More transfer portal than NIL. So that makes it more of a challenge for us.”

But in significant ways, Army has matched up with the big boys of college football.

Army has pumped significant money into an overdue renovation of Michie Stadium, set on the West Point, New York, campus. Work will begin this summer on the removal of the existing east stands, to be replaced with a new 160,000-square-foot structure that includes premium club level seating, a variety of hospitality options, a new fan store, upgraded concessions and amenities and improved stadium accessibility. While Army won’t be displaced for home games, the stadium overhaul won’t be complete until the start of the 2025 season.

Michie’s old-school charm only goes so far in a modern world.

“That’s part of what makes it romantic,” Buddie said. “But we also want running water in the winter time.”

The Black Knights also have have a big-time NFL prospect in linebacker Andre Carter II. Carter had 15.5 sacks last season and was the program’s first AP All-America selection since 1990. He was touted as a possible first-round pick in the 2023 draft but injuries curtailed his production this season. Buddie said Army would essentially defer Carter’s military obligations until his pro career is over.

“We just want him to do it after several Pro Bowls,” Buddie said.

The 6-foot-7, 260-pound Carter could become only the third Army player drafted since 1969.

“I do believe he’s going to have a chance to play football beyond college,” Monken said. “Where that will put him in the draft, I don’t know. Hopefully, he’ll continue to be high on people’s list and they’ll feel compelled to want to take him as a really high draft pick. It’ll be great for him, great for us.”

So, for now, is life as an independent.