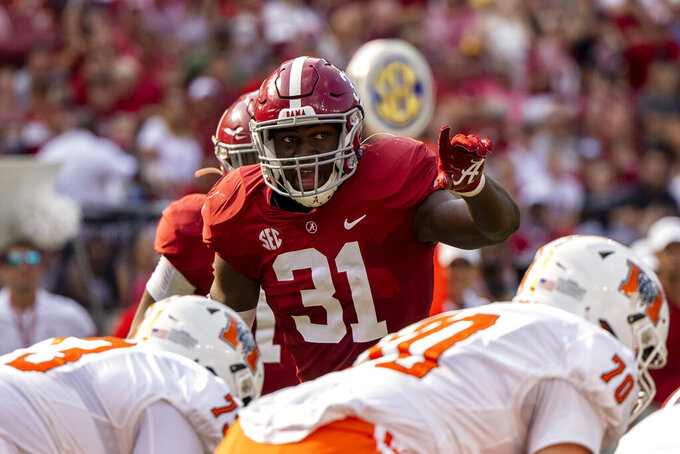 FILE - Alabama linebacker Will Anderson Jr. (31) lines up against Mercer during the first half of an NCAA college football game, Sept. 11, 2021, in Tuscaloosa, Ala. (AP Photo/Vasha Hunt, File)

Will Anderson Jr. has muscled past or blown by blockers with enough regularity to become a unanimous All-America.

His five older sisters were tougher to dominate.

It’s all good-natured fun in the Anderson family, as close-knit as ever since those days packing into a three-bedroom house in suburban Atlanta, where baby brother shared a room with two of his sisters.

Anderson has emerged from that female-dominated family full of volleyball, basketball and track athletes as one of college football’s most dominant defensive players heading into the top-ranked Crimson Tide’s playoff semifinal matchup against No. 4 Cincinnati on Dec. 31.

Anderson leads the nation with 15 1/2 sacks and 32 1/2 tackles for loss, ranking third and second in the school’s single-season list, respectively. He won the Bronko Nagurski Award as the nation’s top defensive player and was fifth in the Heisman Trophy voting won by Alabama quarterback Bryce Young.

The player nicknamed The Terminator is the most dominant pass rusher at Alabama since the late Hall of Famer Derrick Thomas. Intense-looking and businesslike when he’s in the football building — just like his coach, Nick Saban — he does have a lighter side.

Around the locker room, teammates call him “one of the nicest, meanest guys.” He tries to greet neighbors and others with a smile, not the demeanor he calls “football Will.”

Quarterbacks, not so much.

He relaxes by fishing at Lake Nicol when in Tuscaloosa with teammates like Drew Sanders.

At home in Georgia, the Andersons gather and often watch comedies. He figures he has seen Lavell Crawford’s Netflix special “Can A Brother Get Some Love?” at least five times.

Anderson is, in fact, “a silly person,” sister Shanice said.

“Who you see is who you get but he does laugh a lot,” Shanice said. “He’s really silly. He’s really cool. So he definitely is a 20-year-old boy.”

But one who had the benefits and challenges of all those older sisters.

“It had its pros and cons,” Anderson said. “The pros were, they took great care of you. As long as you were on their good side, they took care of you. But then when they were in momma mode and forced you to do stuff, that was the cons.”

Then there’s “football Will,” the ultra-serious one, who even surprises his teammates on occasion with how locked in he gets even a few weeks before a game.

Saban thinks it’s the intangibles that make players great, regardless of their physical tools. The focus. The mindset. The desire to keep improving.

“And Will’s A-plus in all those intangible areas,” Saban said. “Plus, he’s got really good physical ability, and the guy is an overachiever, even at that with all the physical ability that he has because of the mindset that he has. He’s a great effort player. He’s very conscientious.”

Coach and star linebacker share that businesslike approach to football and the often-intimidating intensity. When they lock eyes on the field, Anderson said, there are no smiles but “always a serious look.”

Who has the better scowl? “Probably him,” Anderson said.

A starter since arriving as a five-star recruit, Anderson didn’t get a sack in his first seven games as a freshman. Then his confidence started to build, along with the ability to react quickly and stop thinking so much.

And the vocal leadership, which he demonstrated by calling out the defense publicly after Alabama's narrow win at Florida and its lone loss at Texas A&M.

Now, he’s putting up numbers only one Alabama pass rusher has before. Thomas had 27 sacks in 1988 and 18 the year before. That record is unlikely to be threatened this season, but the 39 tackles for loss could go down if Alabama makes the championship game.

Anderson has spent some time studying Thomas since he started hearing his name more.

“I’m nowhere near as dominant as he was but just to be in the conversation with his name is just a blessing and an honor,” he said. “But he was like a legit dog. It was almost inhuman what he was doing. His numbers were surreal.”

Anderson has topped him in one regard. Thomas was 10th in the Heisman voting in 1988, and Anderson was fifth this year.

The Heisman Trust only invited the top four to this year's ceremony, so Anderson was the odd man out.

He feels he should have been at the Heisman gathering in New York, and Young and other teammates have expressed the same sentiment. Sister Shanice thinks Anderson will use that omission as motivation on the field.

“Its kind of like he’s putting up big numbers, he’s having big plays. And to not be up there with people who are doing equally as good, it was kind of like a slap in the face,” she said. “He just always uses that as fuel to go even harder.

“So I’m very excited to see him play these next two games because I already know he’s going to go out there and put on a show.”