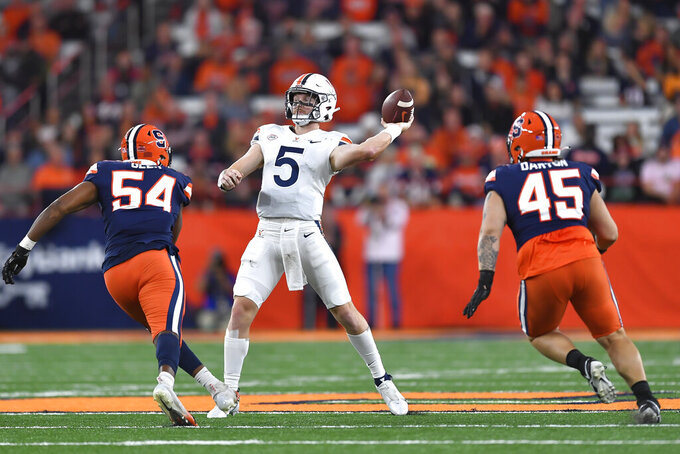 Line: Duke by 2 1/2, according to FanDuel Sportsbook.

This is a matchup of first-year head coaches in Duke's Mike Elko and Virginia's Tony Elliott. In fact, Elliott was a candidate for the Duke opening last year before opting to coach the Cavaliers. Elko's Blue Devils got off to a 3-0 start before falling at Kansas and is playing their first ACC game. Elliott's Cavaliers are coming off a loss at Syracuse in their first league game.

Duke's offensive line against Virginia's pass rush. The Blue Devils have seen QB Riley Leonard get off to a good start in his first season as the full-time starter. It has helped that the Blue Devils have surrendered an ACC-low four sacks through four games. The Cavaliers have recorded an ACC-best 14 sacks.

Virginia: QB Brennan Armstrong. The fifth-year player threw for more than 4,400 yards and 31 touchdowns last year but has failed to crack the 200-yard mark in two of four games this year.

Duke: WR Jalon Calhoun. He leads Duke with 291 yards on 17 catches through four games, putting him third in the league in receiving yards.

Virginia has won seven straight meetings, including last year's 48-0 home win. ... Duke's last win in the series came in 2014 (20-13) at home. ... The Blue Devils have lost 13 straight ACC games since beating Syracuse in 2020. ... The Blue Devils are tied for 11th nationally in turnover margin (plus-6) after two years of ranking near the bottom. ... Virginia has held its last two opponents to fewer than 100 yards rushing and an average of 2.34 yards per carry. The Cavaliers haven't held three straight opponents to sub-100-yard rushing outputs since 2019.