Boilermakers forge ahead despite uncertainty of Badgers game 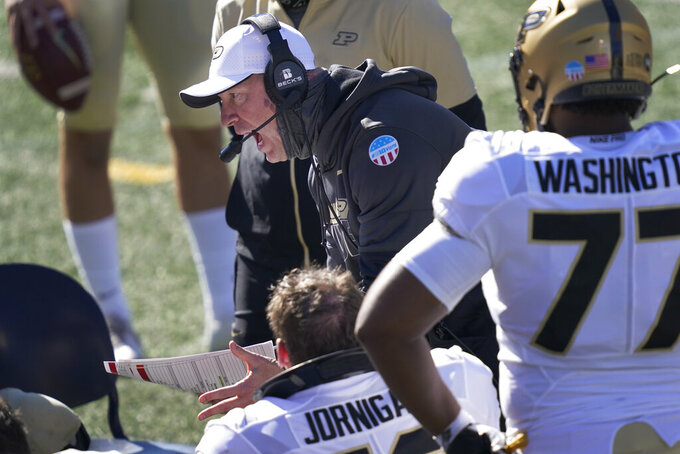 Purdue coach Jeff Brohm has a busier work schedule than usual this week.

Yes, he and his coaching staff expect to face No. 10 Wisconsin on Saturday — even if the COVID-19 outbreak in Madison put the game in limbo. Brohm is also digging for information on the healthy quarterbacks on the Badgers roster.

It's a lesson the Boilermakers have learned this season after facing their own set of obstacles.

Two weeks ago, Brohm confirmed he tested positive for the illness and would miss Purdue's season opener against Iowa.

Last weekend, he returned to the sideline in time to see his team surprised to be facing the No. 3 and No. 4 quarterbacks for Illinois. Starting quarterback Brandon Peters tested positive for COVID and contract tracing forced another dozen players to sit out, including Peters' backup, Isaiah Williams. Third-stringer Matt Robinson started but was replaced by sophomore Coran Taylor after Robinson hurt his leg early in the first quarter.

All Taylor did was take Illinois on two fourth-quarter TD drives though Purdue held on for a 31-24 victory.

If Chryst remains symptom-free, he could be back on the sideline Saturday. Everything else seems to be in flux.

“Our athletic director Mike (Bobinski) is handling that, and I don’t ask a whole lot of questions," Brohm said when asked about the conversations between the two schools. “We’re going to prepare for the next game. We’ve got a great opponent that we’ve got to do everything in our power to get ready to play. So when those decisions are made we’ll adjust, but as of right now, we’re going full speed ahead."

Wisconsin said it plans to announce a decision Tuesday.

If the Badgers do cancel a second straight game it's almost certain it wouldn't be rescheduled because the Big Ten is playing eight games in eight weeks. That could pose another problem with three unbeaten teams left in the West Division — Purdue and Northwestern at 2-0 with the Badgers at 1-0.

Brohm has other issues to sort out, too.

Still, Brohm and the Boilermakers know they must be ready for anything if they hope to snap a 14-game losing streak in the series.

And the quest begins with finding information on a player such as redshirt junior Danny Vanden Boom, the only remaining scholarship quarterback on Wisconsin's roster. His only college pass was for a 3-yard TD against New Mexico in 2018 and his father, Matt, earned All-American honors in 1981 as a defensive back for the Badgers.