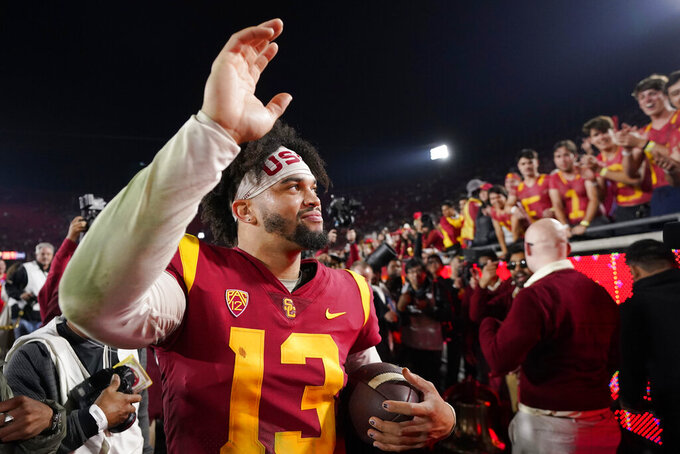 LOS ANGELES (AP) — After Caleb Williams perfectly faked a handoff and sprinted up the middle for the first of his three rushing touchdowns against Notre Dame, he went to the Southern California sideline and extended a stiff-arm with his body coiled in a familiar way.

Williams' teammates had been demanding a Heisman Trophy pose from him, and USC's spectacular quarterback is nothing if not a team player.

“They kept saying it, so I just ended up doing it in the moment,” Williams said with a smile and a shrug.

Williams and the Trojans had plenty to celebrate after a skid-snapping rivalry victory over the Fighting Irish kept them in play for even bigger honors — and made Williams the probable frontrunner to collect the real trophy next month.

Willams polished his Heisman credentials with 232 yards passing and four total touchdowns, and No. 5 USC capped its outstanding regular season under new coach Lincoln Riley by staying firmly in the College Football Playoff race with a 38-27 victory over No. 13 Notre Dame on Saturday night.

Tahj Washington caught an early TD pass from Williams while USC (11-1, No. 6 CFP) ended its four-game losing streak in its famed intersectional rivalry with the Irish (8-4, No. 15 CFP). The Coliseum was packed with fans of both teams, but USC's faithful had a night that recalled this long-struggling program's glittering past.

“I don’t know how long it’s been since it was like that,” Riley said. “I haven’t been here before (this season), but man, it was electric in there. That’s what I remember watching as a young kid. ... These guys have brought it to life.”

The night felt like a Heisman coronation for Williams, who iced it with 2:35 to play by sprinting 16 yards through the heart of the defense for his school-record 44th total TD. Williams was serenaded with frequent chants of “Heisman! Heisman!” from the Coliseum crowd, which has cheered seven previous Heisman winners in this school's fabled history.

“I’ve never seen nothing like it," Washington said. “The things he does on a consistent basis ... he deserves it. He got the crown, you know what I mean?”

Although USC is headed to Pac-12 title game in Las Vegas on Friday to face No. 14 Utah, the revitalized Trojans first kept their CFP hopes intact with this victory — and even got a boost from LSU’s loss to Texas A&M during this game. USC became the first team to gain 400 yards and to score more than 32 points this season against the Irish while completing its first 11-win regular season since 2008.

“I think we're as good as any team, and I'm not just talking about today,” Williams said. “We thought we were a great team, and we got to show it tonight.”

Drew Pyne passed for 318 yards and hit Michael Mayer for two of his three TDs for the Irish, whose five-game winning streak ended in their regular-season finale under new coach Marcus Freeman.

Pyne completed his first 15 throws into the fourth quarter, but he ultimately couldn't keep up with Williams, and the Irish surrendered the Jeweled Shillelagh in their first trip to the Coliseum since 2018.

The 93rd edition of this rivalry was a showcase for Williams, the sophomore who followed Riley from Oklahoma to USC last winter.

With a pocket elusiveness that had Notre Dame's defense embracing air and a lively arm at nearly any distance, Williams set single-season records for quarterbacks in total touchdowns and yards rushing at a school historically rich in talent at the position. His eventful night against the Irish even included an offensive pass interference penalty on a failed Philly Special — and a 58-yard punt, the Trojans' longest of the year.

“That was one of the biggest things, his ability to keep the play alive when it should have been a dead play,” Irish linebacker JD Bertrand said. “He's freaky athletic, and it shows.”

Austin Jones rushed for a career-high 154 yards as USC never trailed, but never pulled away from the tenacious Irish.

Deion Colzie and Logan Diggs scored later in the second half, but Williams kept the Trojans in front until Calen Bullock made his fifth interception of the season for USC with 4:56 to play, boosting the Trojans' turnover margin to an astronomical plus-23.

USC: Williams' brilliance is the main reason for the Trojans' turnaround, considering the defense gave up 408 yards and again had trouble getting off the field against an elite opponent. Yet USC repeatedly has done enough to win, and the Trojans are playoff-worthy if Friday and the numbers work out for them.

USC: A quick trip to Las Vegas on Friday to play Utah for the Trojans' second conference title in 14 seasons.