Conflict raging over 'The Eyes of Texas' school song 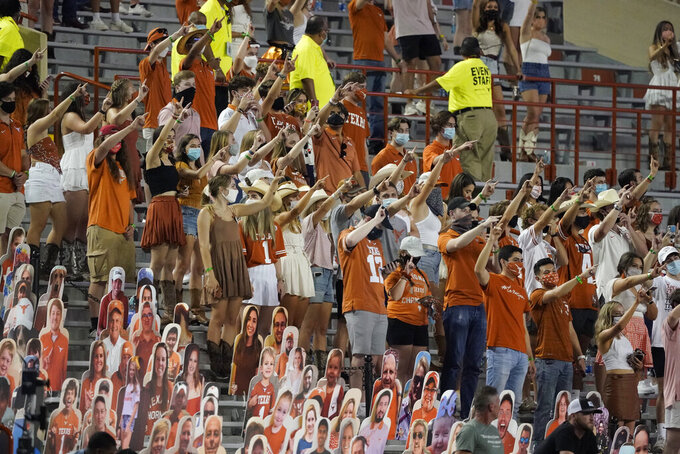 FILE - In this Saturday, Sept. 12, 2020, file photo, fans join in singing "The Eyes of Texas" after Texas defeated UTEP 59-3 in an NCAA college football game in Austin, Texas. Texas athletic director Chris Del Conte said Wednesday, Oct. 14, 2020, he expects players to “stand together as a unified group” to show appreciation for the school and fans during the playing of the school song “The Eyes of Texas” after games, but didn't say what will happen if they refuse. The song has exploded into a thorny controversy after several football players and other athletes said over the summer they no longer wanted to sing it because of its uncomfortable connections to racist elements of the school's past. (AP Photo/Chuck Burton, File)

AUSTIN, Texas (AP) — Losing football games is one thing at the University of Texas. A challenge to the hallowed school song is quite another.

A controversy over “The Eyes of Texas” has lingered for weeks now at Texas, with some players refusing to sing it after games or even stand for it given its links to the racist minstrel shows of yesteryear. Just this week, the highly respected Longhorn Band reportedly has refused to play the song whose history at Texas dates to the early 1900s.

The administration insists the song, one of the school's most treasured traditions, will stay even though it is unlikely that players or student musicians can be ordered to support it.

“Standing for ‘The Eyes of Texas’ is a statement of something – school spirit, loyalty, solidarity,” University of Texas law professor emeritus David Anderson said. “But deliberately not standing, or leaving the field, is a statement just as surely. It’s protected speech.”

Written in 1903 and sung to the tune the tune of “I’ve Been Working on the Railroad," the song is an old standard in Longhorns country. For decades, it has been sung after games and graduation ceremonies and is a popular sing-along at weddings and even funerals

The song has been a sore subject for minority students for decades. The title is taken from a favored saying of a former school president who had mimicked remarks by Confederate Gen. Robert E. Lee. The song was routinely performed by musicians in blackface at minstrel shows.

Amid the racial injustice protests that rocked the nation this year, Texas athletes were among the most prominent college sports figures to join demonstrations after the death of George Floyd. They first marched with coach Tom Herman from campus to the state Capitol, then led a group of students and athletes demanding the school drop “The Eyes of Texas."

Letters to the school president, athletic director and board of regents poured in wanting to keep the song. Some urged thoughtful consideration. Others dismissed the demand from “agitators” and “whiners who just want to create trouble.”

Texas officials kept the song, but told players they would not be required to sing it. A special committee was created to study and present its full history.

But the issue flared again when the football team didn't stay on the field for the song after the first two home games this season. Fan resentment exploded two weeks ago when most of the players left the field again after the annual Texas-Oklahoma game in Dallas.

That prompted athletic director Chris Del Conte to say last week that he expects Longhorns teams to “stand in unison” during the song. He met with the football team to discuss it.

Tyler Valeska of the First Amendment Clinic at the Cornell law school, said Texas would be limited in any attempts to force players to sing or stay on the field for a song they don't support.

“It’s irrelevant whether the general public would not find it controversial. One value the First Amendment protects is dissent,” Valeska said. “We don’t want the government telling people what something means to them when and for what reasons.”

The Daily Texan campus newspaper reported Wednesday that large numbers of Longhorn Band members now refuse to play the song. Band director Scott Hanna did not immediately respond to a request for comment.

The band was not slated to play during this weekend's home game against Baylor, the school said; even without the band, Texas President Jay Hartzell said, “The Eyes of Texas” will still be played at games and events while the school looks for ways to “to join together around our song, which has been so positive for so many Longhorns over the past 120 years.”

Board of Regents Chairman Kevin Eltife backed him up Thursday.

“To be clear, the UT System Board of Regents stands unequivocally and unanimously in support of President Hartzell’s announcement that The Eyes of Texas is, and will remain, the official school song,” Eltife said.

Tasha Philpot, a government professor affiliated with the school's Center for African and African American Studies, said the messages from the administration confuse and put pressure on athletes who were told just a few months ago they didn't have to participate.

“It gave them a lot of agency they hadn’t experienced before,” Philpot said. “Now, coming back and telling them not to exercise that voice, is almost a way of silencing them."

Herman, the football coach, and volleyball coach Jerritt Elliot insisted this week there is no mandate for athletes to participate.

“When you are a young person, when you want to stand for something, it's really easy to dig your feet in the ground pretty early and say this is my stance,” Elliott said. "The biggest mistake I could make as a leader is going in there and say, ‘We’re going to mandate this.'”

Football player Ta'Quon Graham, who is Black, said he doesn't think his teammates worry about their status on the team depending on supporting the song. He plans to stay on the field for the song on Saturday.

“I’m going to support my teammates, and I’m going to give my thanks to the fans because that’s what they deserve," Graham said. “And that’s all I can speak on. I can’t speak for everyone else.”

Quarterback Sam Ehlinger, who is white, said he's told his teammates why the song is important to him. Ehlinger and Graham, the only two players to meet with reporters this week, said the issue hasn't divided the team.

Taking a stand against a school as large and powerful as Texas requires courage, said Jesse Choper, former dean of the University of California-Berkeley law school and professor emeritus. He compared it to former NFL quarterback Colin Kaepernick taking a knee during the national anthem.

“It cost him plenty. He’s still trying to recover his career,” Choper said. “You have to find someone with a lot of guts.”