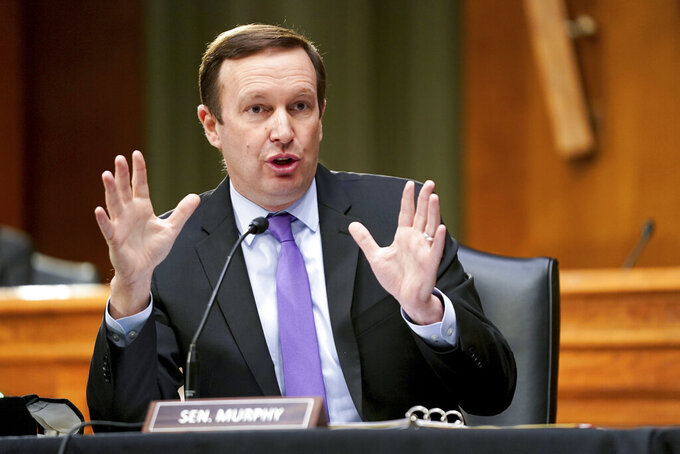 FILE - Sen. Chris Murphy, D-Conn., speaks during a Senate Health, Education, Labor, and Pensions hearing on Capital Hill in Washington, in this Tuesday, May 11, 2021, file photo. College athletes would have the right to organize and collectively bargain with schools and conferences under a bill introduced Thursday, May 27, by Democratic lawmakers in the House and Senate. Sen. Chris Murphy (Conn.) and Sen. Bernie Sanders (Vt.) announced the College Athletes Right to Organize Act. (Jim Lo Scalzo/Pool via AP, File)

College athletes would have the right to organize and collectively bargain with schools and conferences under a bill introduced Thursday by Democrats in the House and Senate.

“Big-time college sports haven’t been ‘amateur’ for a long time, and the NCAA has long denied its players economic and bargaining rights while treating them like commodities,” Murphy said in a statement.

This NCAA said the bill would “directly undercut the purpose of college: earning a degree.” It added that "turning student-athletes into union employees is not the answer.”

A companion bill was introduced in the House by Reps. Jamaal Bowman (N.Y.), Andy Levin (Mich.) and Lori Trahan (Mass.). The bill would amend the National Labor Relations Act to define college athletes who receive direct grant-in-aid from their schools as employees.

A movement at Northwestern to unionize college football players was rejected by the National Labor Relations Board in 2015.

Murphy and Trahan are among several federal lawmakers from both parties who have previously introduced legislation related to college athletes being permitted to earn money for use of their name, image and likeness.

The NCAA has turned to Congress for help as it tries to reform its rules to allow athletes to be paid for endorsements, personal appearances and autograph signings.

Several states, including Florida, Georgia and Mississippi, have laws scheduled to take effect July 1 that would open the NIL market to college athletes.

The NCAA hopes to have news rules in place by July 1 as well.

The NCAA's current proposals regarding NIL would allow athletes to enter financial arrangements with third parties. Schools would be banned from being involved in the transactions or paying athletes.

While the NCAA has loosened restrictions on how athletes can be compensated over the years, it has held firm to the notion they are not employees.

Murphy has been one of the most vocal advocates for college athlete rights on Capitol Hill. His latest bill would upend the college model, helping athletes “get the pay and protections they deserve” and forcing the NCAA to "treat them as equals rather than second-class citizens. It’s a civil rights issue, and a matter of basic fairness.”

If Murphy's bill became law, athletes would be granted employee status and both public and private colleges would deemed their employers under an amended NLRA.

The NLRB would consider colleges within a conference part of a "bargaining unit."

The bill would also protect the tax status of athletic scholarships and other benefits, and prohibit schools from asking athletes to waive the right to collectively bargain.

“The NCAA and its member schools support student-athletes through scholarships — many of which cover their full cost of education debt free — and numerous other benefits," the governing body said a statement.

“NCAA members also are committed to modernizing name, image and likeness rules so student-athletes can benefit from those opportunities. ... We will continue to work with members of Congress to focus on issues that align with our priorities."