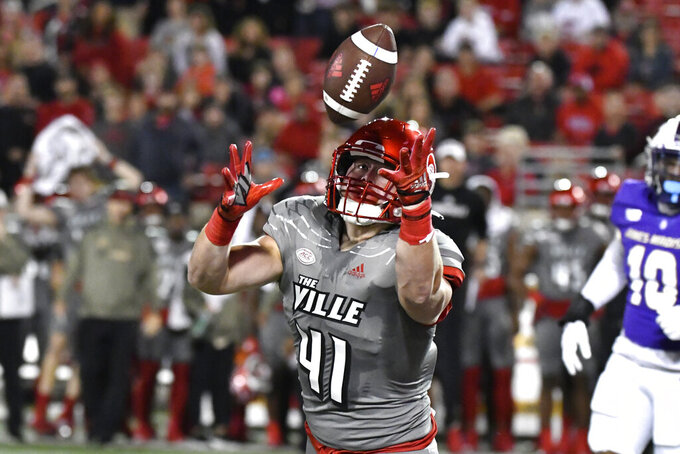 LOUISVILLE, Ky. (AP) — What a difference a month makes for the Louisville Cardinals.

On Oct. 1, coach Scott Satterfield’s team sat at 2-3 after a perplexing loss at Boston College, and a back-loaded schedule with several teams that were either ranked or had been earlier in the season loomed over the team.

On Saturday night, after the Cardinals beat James Madison 34-10, Louisville sits 6-3, and the fourth-year coach credited the turnaround to doing the little things.

That was evident Saturday as the Cardinals torched what was the nation’s leading rushing defense for 244 yards on the ground. The Dukes (5-3) entered the game allowing just 384 yards in their first seven contests.

Tiyon Evans ran for 126 yards on 10 carries, including a 71-yard touchdown that broke the game open in the third quarter. Jawhar Jordan added 117 yards on 17 carries.

Evans, who missed a couple of weeks after suffering a lower leg injury in the 34-33 loss at Boston College, said the team was trying to figure out its identity a month ago.

“I can say we’re heading now in the right direction,” said Evans, who had his second straight 100-yard performance.

Malik Cunningham threw for 223 yards and three scores on 14-of-20 passing in the win, with Tyler Hudson catching six of those passes for 142 yards and a touchdown.

Unlike last week, when Louisville’s defense forced Wake Forest into eight turnovers and eight sacks, the Cardinals did not get any of those against the Dukes. However, the Cardinals found a way to stymie an offense that entered Saturday averaging 38.7 points and 480.7 yards per game, limiting James Madison to just 193 yards.

Cunningham, however, then rallied the Cardinals for a nine-play, 65-yard drive that led to a James Turner 28-yard field goal to end the half and tie the game.

After the Dukes took the lead late in the second half, coach Curt Cignetti said Louisville dominated the rest of the way.

“They played big boy ball in the second half,” he said.

Quarterback Todd Centeio returned to action for James Madison after missing the Oct. 22 game against Marshall due to an oblique injury. But he threw for just 52 yards on 4-of-15 passing after throwing for 862 yards in his two previous starts.

Saturday’s win marked the first time in more than 20 years that Louisville won a game in which its defense failed to get a sack or a turnover. The last such win came on Sept. 21, 2002, when the Cardinals beat Army 45-14.

Cunningham’s three touchdowns passing on Saturday means he’s now accountable for 119 touchdowns in his Louisville career. That ties Lamar Jackson for the team record. Cunningham has 70 passing and 49 rushing scores, compared to 50 rushing and 69 passing for Jackson.

James Madison: After starting their first FBS season with five straight wins and a Top 25 ranking, the Dukes have hit a rough patch with three straight losses.

Cignetti attributed some of that to a lack of depth.

“It takes time to build depth,” he said. “We have a lot of disappointed guys. We got off to a fast start. Our guys aren’t used to this.”

Louisville: The Cardinals not only clinched bowl eligibility on Saturday, they now have their longest winning streak under Satterfield. It’s also Louisville’s longest streak since winning five straight in 2016, Jackson’s Heisman Trophy-winning season.

Louisville plays at Clemson Saturday and seeks its first win against its Atlantic Coast Conference foe.