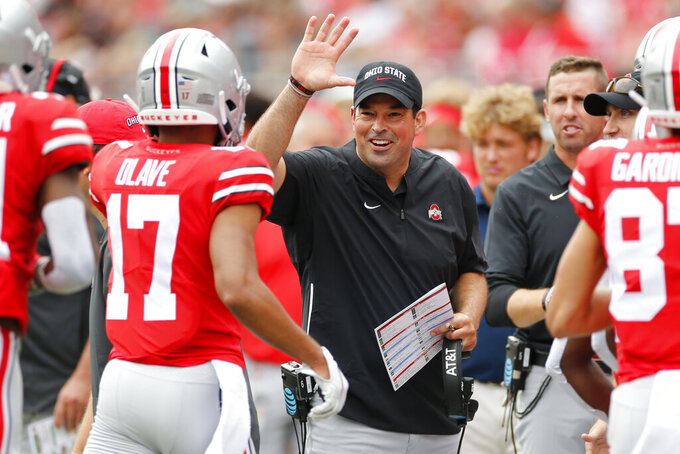 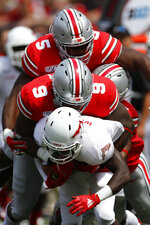 COLUMBUS, Ohio (AP) — Justin Fields made some mistakes that quarterbacks make when they haven't played much. The much-ballyhooed Georgia transfer also showed flashes of how good he might be and why he was a five-star recruit.

Fields, who saw limited action as a freshman last season sitting behind Jake Fromm, threw four touchdown passes and ran for a score in his first game for Ohio State, leading the fifth-ranked Buckeyes over Florida Atlantic 45-21 on Saturday in the season opener.

The Buckeyes' offense sputtered in the second and third quarters behind its relatively inexperienced leader. Fields stayed in the game for all but the last offensive series, finishing 18 for 25 for 234 yards.

"We jumped on them early, but we just got to keep that tempo up and just be able to score all game long," Fields said.

"Lots to build from off of today," Ohio State coach Ryan Day said. "I thought overall, though, game management was decent. There was one time where (Fields) scrambled out and took a sack, could have just thrown it away. It would have been second-and110. I think it was second and 14. A lot of little things going on there. But again, overall pretty solid."

FAU: The Owls had trouble keeping up with Ohio State's better athletes but mustered enough momentum for a couple of long fourth-quarter scoring drives after the game was already out of hand.

"We gave ourselves a chance to stay in the game, but they're just a really good team and we shot ourselves in the foot early," Owls tight end Harrison Bryant said.

Ohio State: Fields' numbers look great, but he made his share of gaffes that led to the offense getting stuck. The first-team defense was excellent, holding FAU to minus-14 total yards in the first half. But against this opponent, it was hard to tell how good the Buckeyes really are.

"On defense, I thought we ran to the ball early on, then our second team came in a little bit and they let them come down the field," Day said. "We can't let that happen."

TOO LITTLE TOO LATE

Florida Atlantic had trouble generating anything good until putting together a 75-yard drive in the fourth quarter against Ohio State's backups for the Owls' first touchdown of the game.

Chris Robison finished 22 for 34 for 178 yards and a touchdown for the Owls. FAU was held to just 22 yards on the ground by a revamped Ohio State defense that was coming off a down season.

"If you play a top-five team like that, you have to do everything right just to have a chance," FAU coach Lane Kiffin said.

Day made his debut as Ohio State's full-time head coach after being the interim last season while Urban Meyer was serving a three-game suspension for his handling of domestic violence allegations against a former assistant.

He was named head coach when Meyer retired after last season.

Day said his moment of realization came in the tunnel as the team was getting ready to take the field. It made the hair stand up on his arms.

"It was really humbling to just run out of the tunnel with our guys with a packed house," he said.

By doing what they were expected to do against a weaker team, Ohio State likely won't budge in the poll.

"The defense started out real fast. We've got to get some young guys going, but it's going to take time. Overall, we played great." — Ohio State DE Chase Young.

The FAU team left quickly after the game for the Columbus airport to get home before Hurricane Dorian gets any closer to the US. The school is in Boca Raton on the state's southeast coast. The latest forecast has the storm skirting the coast.

FAU: The Owls won't get a break as they host No. 17 Central Florida, which routed Florida A&M 62-0 on Thursday.

Ohio State: The Buckeyes get their first real test of the season next week against in-state rival Cincinnati, which took down UCLA 24-14 in their opener on Thursday night.