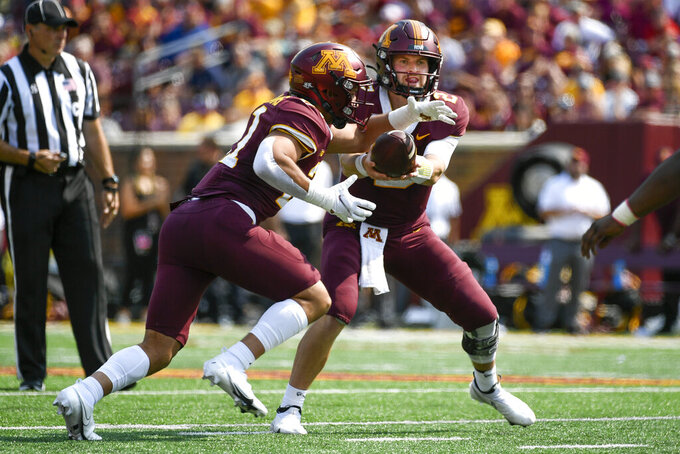 Minnesota quarterback Tanner Morgan hands off to running back Bryce Williams during the first half of an NCAA college football game against against Miami of Ohio Saturday, Sept. 11, 2021, in Minneapolis. Minnesota won 31-26. (AP Photo/Craig Lassig) 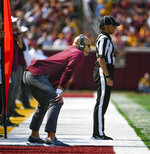 BOULDER, Colo. (AP) — The Colorado Buffaloes’ depth chart contains a bunch of characters — from TV shows and Hollywood movies. Even a few singers, too.

Just part of the plan not to reveal anything along the lines of position depth since Minnesota doesn’t either.

So the fictitious “starter” Saturday for Colorado (1-1) against the Gophers at quarterback will be Paul Crewe from “The Longest Yard" instead of Brendon Lewis. At cornerback, Ron Burgundy of “Anchorman.” At long and short snapper, Stan and Kyle from “South Park." Jimmy Buffett (position: "reefer receiver") along with Paul McCartney and Ringo Starr ("Beatlebacks"), also make the lineup.

All just fun and names — until kickoff at Folsom Field when the Gophers (1-1) try to extend their nonconference winning streak to 21 straight. It’s the longest active streak in the nation, ahead of Iowa (13), Kentucky (12) and Alabama (10). Minnesota hasn't lost an out-of-conference game since Sept. 3, 2015, against TCU.

For Minnesota, too. The Gophers have a healthy respect for a Buffs team they're facing for the first time since 1992. Colorado leads the all-time series 3-0.

“They’re really good,” said Minnesota coach P.J. Fleck, whose team lost to Ohio State in the opener before rebounding against Miami (Ohio) last weekend. “They’re physical. You can tell they really like playing for each other. They’re a connected football team, a really good football team.”

That's part of a new identity in Boulder, which was on display last weekend when the Buffaloes took Texas A&M, ranked No. 5 at the time, to the wire before a 10-7 loss.

“We’re mean,” Buffs tight end Brady Russell said. “We want to get after people. We want to put them on their backs. That culture that we’ve instilled in the offseason is now carrying over into the season.”

One thing Colorado can expect from the Gophers will be plenty of running plays. Trey Potts has stepped in after Minnesota lost standout tailback Mohamed Ibrahim to a lower-leg injury against Ohio State. Potts carried the ball 34 times in the win over Miami (Ohio) as he finished with 178 yards and two TDs.

Count on Colorado running it plenty as well. The Buffaloes figure to have tailback Jarek Broussard on the field after he was banged up against Texas A&M. There's also Alex Fontenot.

In a pinch, Colorado has Kelly Leak and Tanner Boyle of the “Bad News Bears.” At least, they're listed on the depth chart.

It will be Fleck’s 100th career coaching game Saturday in Boulder. He’s 57-42 at Western Michigan and Minnesota, where he’s in his fifth season and already ninth in school history in wins (27-20).

Gophers QB Tanner Morgan is 19-9 as a starter. He needs one more passing TD to reach the 50 plateau for his career, joining Minnesota QBs Adam Weber (72), Bryan Cupito (55) and Asad Abdul-Khaliq (55).

Minnesota kicker Matthew Trickett is off to a strong start with his new team after transferring from Kent State. He's made all 10 of his attempts (eight extra points and two field goals). He connected on a 50-yarder last week against Miami (Ohio), the first from 50-plus for the Gophers in three years. In 2019, Trickett tied for the NCAA lead and set a Kent State record with 29 made field goals.

“Definitely, you have to gain everyone’s trust. Nobody knows you," Trickett said. “You’ve got to make kicks.”

A Colorado defense led by linebacker Nate Landman has surrendered under 300 yards against Northern Colorado (256) and the Aggies (288). That’s the eighth time it’s happened over the last 50 seasons at Colorado. The streak reached three straight in 1976.

“We know we can be one of the most physical teams anybody plays against,” defensive lineman Na’im Rodman said.

Buffaloes receiver La’Vontae Shenault missed the Texas A&M game due to an indefinite suspension for violating team and athletic department rules. Dorrell said there remains a path for him to return to the team.

“I believe in rehabilitation,” Dorrell said. “But he’s got some stipulations that he’s going to have to show us that he wants to be back.”