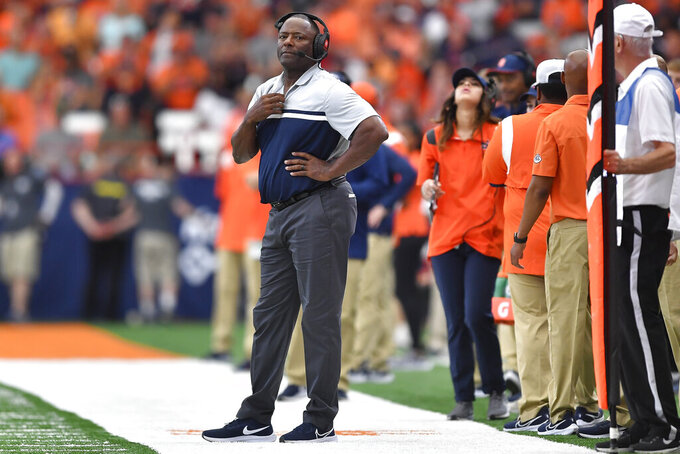 Maye, a second-year passer, was picked as the league's top offensive player through the season's first half in voting by AP writers covering league teams after ranking among the Bowl Subdivision's most prolific passers. Babers was the choice as top coach for the 18th-ranked Syracuse, which was also voted as the league's most surprising team on the list released Wednesday.

Maye entered this year with just seven pass attempts but has thrived in Phil Longo's high-scoring scheme beyond all expectations. He is third in FBS with 21 touchdowns compared to just three interceptions, while his passing yardage (317.2 average) is eighth in FBS and he also ranks in the top 20 in completion percentage (69.4%).

Maye's brilliance has allowed the Tar Heels (5-1, 2-0 ACC) to overcome a shaky defense through sheer scoring volume, which has put them in contention in the league's Coastal Division.

“He gives us a chance because we can score points offensively to be in every game,” UNC coach Mack Brown said recently, "and never be out of a game.”

Babers entered his seventh year facing growing pressure. The Orange had been picked last in the Atlantic Division race after going from a 10-win season in 2018 to just one win two seasons later.

Syracuse (5-0, 2-0) ranks near the top of the league in scoring (38.4) while boasting one of the nation's top defenses, which ranks ninth in FBS by holding opponents to 14.0 points per game.

“They haven’t played perfect football, but the record is still perfect and now they get an opportunity to do some exciting stuff,” Babers said. "It doesn’t mean that we will, but it does mean we have a chance.”

Syracuase LB Mikel Jones, the leader of the Orange's testy defense after being a first-team AP all-ACC pick last year. Jones is a two-time league linebacker of the week so far and has averaged 8.8 tackles while tallying two sacks in four games against FBS opponents.

North Carolina RB Omarion Hampton, who has provided a boost on the ground, ranking fourth in the league with six rushing scores to go with two 100-yard rushing performances.

Florida State DE Jared Verse. The transfer from Albany is the ACC's per-game leader in sacks (four in five games) and tackles for loss (7 1/2).

Pittsburgh RB Israel Abanikanda, who has become one of the nation's top rushers. After running for 730 yards through his first two seasons, Abanikanda has run for 830 yards (138.3 per game, No. 5 in FBS) in just six games this year. That includes an eye-popping 320 yards and six scores in last weekend's win against Virginia Tech, which gave him an FBS-best 12 rushing TDs.

Miami, which is off to a bumpy start to Mario Cristobal's return to the program where he won two national championships as a player. The preseason favorite in the Coastal Division was ranked No. 16 in the preseason AP Top 25, but the Hurricanes are 2-3 with a home loss to Middle Tennessee State.

Georgia Tech has already made a coaching change with the firing of Geoff Collins. That has only increased the attention on fourth-year Louisville coach Scott Satterfield, who went 10-14 in the past two seasons and is off to a 1-3 start in league play.

Preseason league player of the year Devin Leary at No. 15 North Carolina State faces an unclear timeline after a shoulder injury last weekend against Florida State.

Coach Dave Doeren said the quarterback won't need surgery, but left open the possibility of a multi-week absence. That could be significant as the Wolfpack pursues only the second double-digit win total in program history.