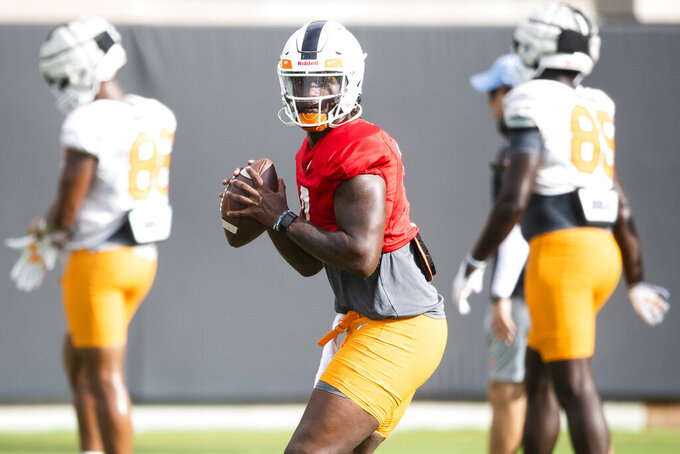 Milton, who arrived on campus this spring after three years at Michigan, beat out Harrison Bailey, who started three games for the Vols last season, and Hendon Hooker, who transferred from Virginia Tech in early January about 10 days before coach Jeremy Pruitt was fired.

“Joe, his grasp of our offense in a short amount of time, his growth in the middle portion of training camp, his physical attributes, decision-making, led us to put the ball into his hands,” Heupel said Monday.

The 6-foot-5, 244-pound Milton started five of the Wolverines’ six games last season. Heupel said Milton has run the No. 1 unit in practice the last 7-10 days leading up to game week.

Milton played in four games each of his first two seasons at Michigan. A strong-armed thrower also able to run, Milton was 80 of 141 for 1,077 yards with four touchdowns and four interceptions in last year’s pandemic-truncated Big Ten season.

“Decision-making at the quarterback position is a must,” Heupel said. “Guys who make a consistently bad decision are going to get you beat. You have to put the ball in the right players’ hands at the right time."

Runner-up for the Heisman Trophy in 2000 as a player at Oklahoma, Heupel has designed a prolific offense that averaged 544 yards and 43 points over the last three years at Central Florida. The design is for an up-tempo game that hinges on quick decisions by the quarterback.

Milton was not available Monday. Earlier in preseason camp, he talked about how the new Tennessee offense complemented his skills.

“You don’t have to be a robot on the field,” Milton said. “This offense lets me be who I am. Get out on the field, react and have fun.”

Cedric Tillman, likely one of Milton’s top receivers, is looking forward to what they can become.

“I saw me and Joe’s chemistry develop after the first week of camp,” Tillman said Monday. “Joe has a strong arm. As we go through the season, we’ll both get better.”