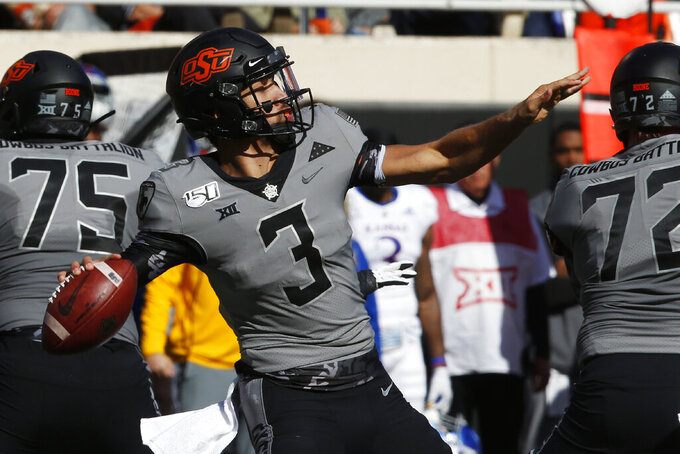 STILLWATER, Okla. (AP) — Oklahoma State coach Mike Gundy broke away from his usual approach to postseason awards and lobbied for Chuba Hubbard to be a Heisman Trophy finalist.

Hubbard, the nation’s leading rusher, ran for 122 yards and two touchdowns, and No. 25 Oklahoma State rolled past Kansas 31-13 on Saturday.

He has rushed for 1,726 yards this season in 10 games. Gundy believes if Hubbard leads Power Five backs in rushing, he should get an invitation to New York for the Heisman ceremony.

“He deserves to be there,” Gundy said. “And I can honestly say that for him because he’s a very humble, hardworking young man. And you know me — I don’t step out there much.”

Hubbard’s yardage total is the fifth-best in school history for a season, trailing 1988 Heisman winner Barry Sanders, 1977 Heisman runner-up Terry Miller, Ernest Anderson and Thurman Thomas. He has two regular-season games remaining, and on his current pace, he would pass all but Sanders on the school’s single-season chart.

“We’re proud of what he’s done,” Gundy said. “But at some point, you have to look and say, ‘OK, is this a quarterback award?’ Or do running backs or other positions potentially get involved.”

Dillon Stoner caught five passes for a career-high 150 yards and two touchdowns and Spencer Sanders passed for 168 yards and a touchdown for the Cowboys (7-3, 4-3 Big 12, No. 22 CFP), who won their third straight.

Hubbard scored his first touchdown just over three minutes into the game. He ran for 100 yards and two touchdowns in the first half to help Oklahoma State take a 24-0 lead.

In the third quarter, backup quarterback Dru Brown threw a perfect strike for a 43-yard touchdown to Stoner to push the lead to 31-0. Oklahoma State gained 481 total yards, including 243 rushing.

It was the first meeting between Kansas coach Les Miles and Oklahoma State coach Mike Gundy. Gundy was Miles’ offensive coordinator at Oklahoma State from 2001 to 2004 before Miles left to become head coach at LSU and Gundy took over as head coach for the Cowboys.

Miles appreciated the chance to return.

“I really like this place,” he said. “The people here were kind to my family. I had two children born here. I enjoyed it and always look back and think how special this place is to my family.”

Kansas: The Jayhawks were routed for the third time this season. They had lost just 50-48 to Texas earlier in the year and had been close in two other losses. On Saturday, the Jayhawks got off to a rough start and never got into the game.

Oklahoma State: The Cowboys’ defense has been a weaker link than the offense over the years, but the unit was dominant against the Jayhawks. Oklahoma State allowed just 290 total yards, including 39 yards rushing.

Stoner has been a critical piece of Oklahoma State’s offense since star receiver Tylan Wallace was injured. In the past two games, Stoner has eight catches for 243 yards and four touchdowns.

“I wouldn’t really say stepping up because he’s always played at that level,” Sanders said. “He’s that good of a player. I believe he’s really one of our truly talented guys who’s just outstanding, so I wouldn’t say ‘stepped up,’ I would say people are starting to notice because that’s who Stoner is.”

Kansas running back Pooka Williams entered the game third in the Big 12 with 90.8 yards rushing per game in league play. He was held to 26 yards on 12 carries on Saturday.

Oklahoma State kicker Matt Ammendola entered the game having made 14 of 15 field goals. In this game, he made one from 44 yards, but missed from 26, 45 and 48 yards.

Sanders left the game in the third quarter with a right (throwing) hand injury, and he wore a light brace after the game. Gundy said the move was precautionary and he wanted to give Brown a chance to play. Brown completed 3 of 5 passes for 70 yards and a touchdown.

The Cowboys did what was necessary to remain a ranked team.