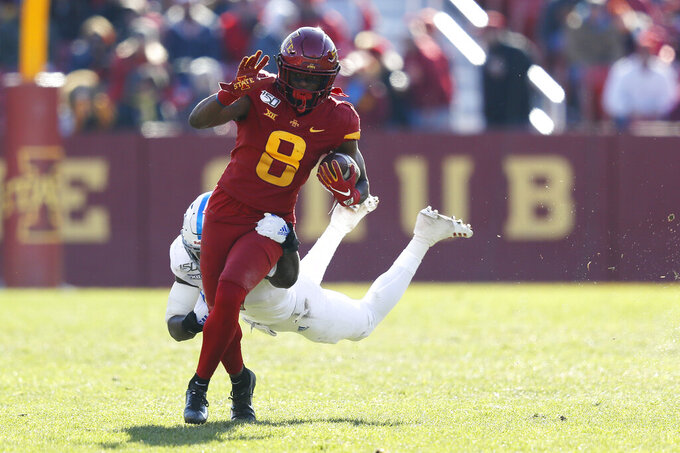 MANHATTAN, Kan. (AP) — Iowa State and Kansas State are both headed to bowl games after they play Saturday.

Which ones could depend heavily on the outcome.

The Cyclones (7-4, 5-3 Big 12) could be the best four-loss team in the nation, the defeats having come by a combined 11 points to teams that all have been ranked this season. Kansas State (7-4, 4-4) is the only team to knock off Oklahoma, a feather in the cap of new coach Chris Klieman.

But regardless of how they have reached this point, the two land-grant colleges meet for their game dubbed informally “Farmageddon” essentially tied in the conference bowl pecking order.

“We still have not played four quarters of our best football,” Campbell added, “and what an unbelievable opportunity to do it this week.”

If they had played four quarters a couple times, Iowa State could be playing for bigger things.

But a good season was expected in Ames. Nobody knew quite what to expect in Manhattan, where Klieman brought a championship pedigree from lower-division North Dakota State but was taking over the sizeable shoes of Hall of Fame coach Bill Snyder.

The Wildcats were picked to finish near the bottom of the Big 12, yet they won their first three games — including a road win over Mississippi State — and had that memorable win over the Sooners.

Of course, just like the Cyclones, there have been lamentable lapses: They lost 27-24 at Texas, then dropped a 24-20 upset to West Virginia the following week.

“We talk about the process,” Klieman said, “but I’m happy for some of those results to show out for our coaching staff. And, I think it helps from a recruiting standpoint. It helps for our younger players, all those things. We wanted growth in this first year. If you asked, I never told you how many games we were going to win this first year. We wanted growth, guys believing and getting better.

“That’s what I have seen from week one through week 11 and now. So, I’m excited for the future.”

“So much of what Coach Snyder built for so long at Kansas State for so long as been so well-respected that I think those fabrics are things you try to implement in this program: The consistency, playing hard, winning in the margins,” he said. “Those are things that have been emphasized a long time, and they are being emphasized now with a new coaching staff.”

One thing the Cyclones have done well is dominate the fourth quarter, helping them win close games while coming close in games in which they were down big.

“I don’t know if it’s one of those statistics that’s team-driven or this year. We’ve done a really good job of making adjustment,” Campbell said, “and by the time we get to the fourth quarter, we’re playing some really good football.”

Kansas State will bid farewell to a large senior class on Saturday, most of whom stuck with the program through the coaching change.

“The thing that’s so special about our group is really the number,” senior tight end Blaise Gammon said. “We have so many guys that have stuck together and wanted to be here. It’s really special for all of us to have one more shot out here.”

Klieman said he expects wide receiver Malik Knowles and defensive back Walter Neil Jr. to play against Iowa State. Both of them came out of the game last week with injuries.

The Wildcats are the only Big 12 team with a new coach that will be headed to a bowl game this season. Texas Tech and West Virginia are both 4-7 heading into their finales, while Kansas is 3-8.