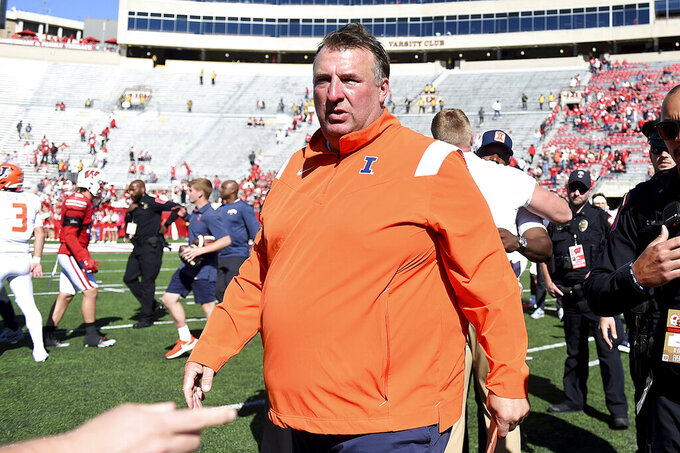 Line: Illinois by 3 1/2, according to FanDuel Sportsbook.

The Big Ten West is seemingly there for the taking after the Illini dismantled Wisconsin in Madison last week and cost Paul Chryst his job. Saturday's winner will stay atop the division with favorable matchups on the horizon. Iowa coach Kirk Ferentz noted that Illinois is “three points away from being undefeated" and has improved significantly on offense. Illinois coach Bret Bielema has Champaign buzzing with excitement, but a win over the Hawkeyes for the first time since 2008 could take the excitement to a fever pitch.

Illini offensive line vs. Hawkeyes defensive line. The margin for error is smaller than usual this year for another talented Iowa defense because of struggles on the other side of the ball, but if players like DT Lukas Van Ness (five tackles for loss, three sacks) and DE Joe Evans (four tackles for loss, two sacks) can win their matchups and limit Illini RB Chase Brown, the Hawkeyes could walk out of Champaign with another win. Veteran Alex Palczewski and junior college transfer Zy Crisler have been particularly effective for the Illini.

Iowa: QB Spencer Petras might finally be finding a rapport with someone in the Hawkeyes' struggling passing attack. He hit sophomore tight end Luke Lachey for four receptions, 84 yards and a touchdown — one of two Petras has thrown in five games — in the loss to Michigan last week. Against the Illini's No. 3-ranked run defense, Petras will have to hit some targets to move the chains.

Illinois: Chase Brown leads the nation with 733 rushing yards. He had 129 in the win over the Badgers last week and now has 25 carries of more than 10 yards, a mark that also leads the country. In the secondary, Devon Witherspoon and Jartavius Martin rank second and eighth, respectively, with 1.8 and 1.6 passes defended per game.

Iowa has beaten Illinois in eight straight games dating back to 2008, the longest streak in the series in 77 meetings. ... Illinois ranks No. 1 in the FBS in scoring defense, allowing 8.4 points per game. It is third in total defense, allowing 228 yards per game. ... Bielema walked on to Iowa's football team in 1989 and was a defensive lineman until his graduation in 1992 before joining the staff as a graduate assistant. ... Iowa has outscored Illinois 156-35 in the last four meetings in Champaign.