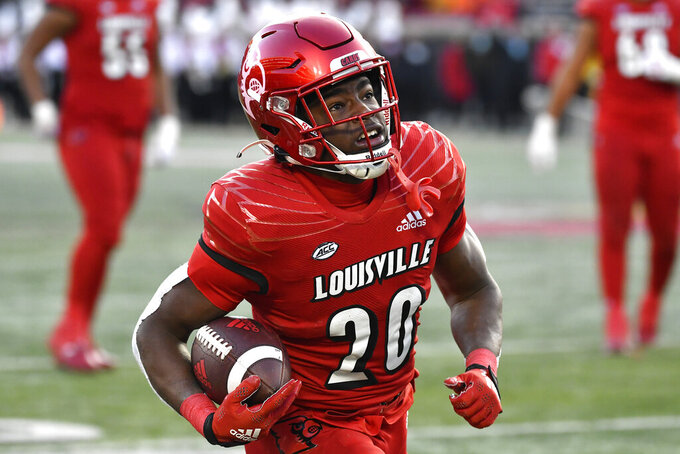 Jordan, a sophomore finished with 105 yards in 16 carries His second touchdown, a 2-yard run, gave Louisville a 22-10 lead early in the fourth quarter.

“A lot of times, people write you off,” Domann said. "We trust our preparation. Everybody around me was good (today).”

The Wolfpack (7-4, 3-4) got within 13-10 in the third quarter when Ben Finley connected with Michael Allen for a 34-yard touchdown pass.

North Carolina State started the season with four straight wins and a national ranking. However, the Wolfpack have lost two straight and three of their last five. The Wolfpack again struggled offensively gaining 245 total yards, 63 rushing.

Louisville had its four-game win streak stopped last week at Clemson. A win next week at Kentucky would mark the highest win total in the regular season under coach Scott Satterfied.

In an otherwise dull offensive first half for Louisville, Jawhar Jordan's 98-yard kickoff return for a touchdown with 4:31 left in the second quarter was a bright spot. Jordan fumbled the ball around the 4, picked it up, ran up the middle of the field through traffic, evaded kicker Shane McDonough at his own 45, veered to the left and scored untouched.

Seconds before James Turner’s second field that ended the half, a fireworks display ignited prematurely in the south end zone. Louisville never flinched and Turner made the 22-yard field goal.

Senior quarterback Malik Cunningham missed his final home game because of a right shoulder injury sustained last week in a loss to Clemson. Cunningham has rushed for 3,180 yards and passed for 9,648. He is responsible for 119 touchdowns.

Cunningham also missed the Virginia game because of an injury earlier.

Louisville plays at Kentucky in the Battle of The Bluegrass, Saturday afternoon.