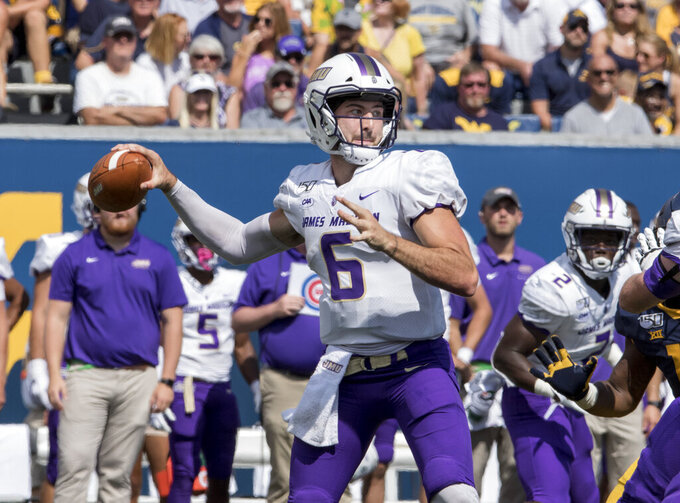 MORGANTOWN, W.Va. (AP) — Austin Kendall loved the outcome but wasn't happy that West Virginia's offense struggled for much of the game against a Championship Subdivision opponent.

The Oklahoma graduate transfer threw two second-half touchdown passes in his debut for the Mountaineers, who needed a comeback to hold off James Madison 20-13 Saturday.

Kendall couldn't generate a ton of yards under constant pressure but did just enough to give Neal Brown a victory in his first game as West Virginia's coach while preventing the Mountaineers from losing to an FCS opponent for the first time.

West Virginia's strengths entering the season were its depth at running back and on the offensive and defensive lines. All of those units underperformed as James Madison dominated the line of scrimmage for a good portion of the game.

The Mountaineers averaged just 1.4 yards per rush, leaving it up to Kendall to bail them out.

"Say what you want," Brown said. "The offense wasn't pretty. I was really proud of this group and how we reacted at halftime. We didn't panic. I thought we took control of the game, even though we had to win it right at the end of the game."

Evan Staley kicked two field goals for West Virginia, including a 43-yarder early in the fourth that put West Virginia ahead 13-10.

Keith Washington intercepted Ben DiNucci's next pass and West Virginia took over at the Dukes 30. On third down, Kendall found Bush wide open behind two defenders in the end zone on a 22-yard scoring pass. Kendall finished 27 of 42 for 260 yards.

DiNucci impressed with both his running and passing. He twice converted long third-down throws on the next drive, leading to Ethan Ratke's 31-yard field goal with 4:33 remaining.

James Madison had two chances with the ball after that but couldn't get into scoring position.

"We weren't consistent enough with our passing game," said Dukes coach Curt Cignetti. "I thought they wore us down a little bit as the game went on."

James Madison fumbled the ball away twice and also had a field goal blocked.

James Madison: The Dukes looked like the better team for much of the game under their new coach and showed why they are ranked No. 2 in the Championship Subdivision preseason coaches' poll.

"I think we have a chance to be a good football team," Cignetti said.

West Virginia: The Mountaineers entered the season with a young squad and their concerns only seemed to grow after getting outgained 328-294.

West Virginia's Kennedy McKoy, who ran for 802 yards a year ago, was limited to 11 yards on 11 carries. Martell Pettaway led the Mountaineers with 20 yards on nine attempts.

"I thought we played really well on defense," Cignetti said. "We stuffed the run and did a great job."

After losing most of its production from a year ago, West Virginia got immediate help from some of its young wide receivers. Redshirt freshman Sam James caught six passes for 32 yards and Temple transfer Sean Ryan, a sophomore, had two catches for 31 yards.