The Latest: Texas Tech football has no new positive tests 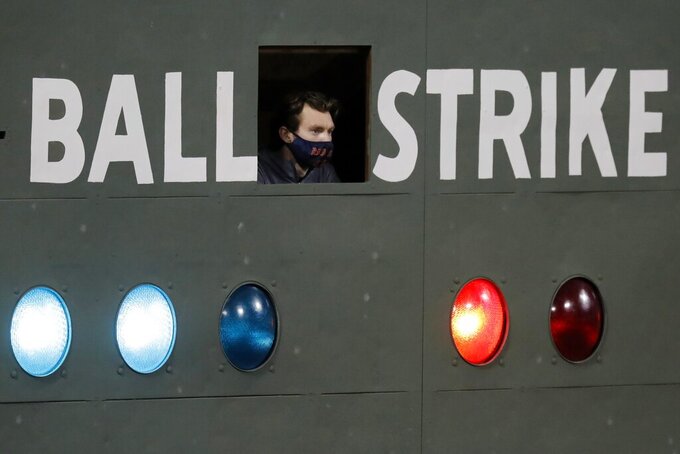 The scorekeeper wears a mask as he watches play from the left field scoreboard at Fenway Park during the eighth inning of a baseball game between the Boston Red Sox and the New York Yankees, Friday, Sept. 18, 2020, in Boston. (AP Photo/Michael Dwyer)

The latest numbers released Monday showed no active cases for the Red Raiders, who are scheduled to open Big 12 play Saturday at home against No. 8 Texas.

During preseason camp last month, the Red Raiders at one point had at least 20 players out because of positive tests, in addition to an unspecified number of other players who had to quarantine because of close contact with those who tested positive.

Tech’s overall numbers since getting back on campus this summer include reported recoveries of 75 football players and five staff members with the team.

UMass says it will play football this fall, reversing an August decision to postpone the season until the spring.

One of few independents in the Football Bowl Subdivision, the school says it will start in mid-October. Games still need to be scheduled, which could be a challenge because most leagues are playing a limited number of nonconference games, if any.

There will be no fans at any of the team’s home games in Amherst.

UMass was an occasional power in Division I-AA, now known as the Football Championship Subdivision, winning it all in 1998 and returning to the title game eight years later. But since making the jump to the FBS in 2012, the Minutemen have gone 19-77. They left the Mid-American Conference and became an independent in 2016.

English soccer club Leyton Orient says several players have tested positive for the coronavirus a day before the fourth-division team is scheduled to face Tottenham in the League Cup.

The club says it has informed Tottenham and will make a further announcement later regarding Tuesday’s match. The club’s stadium and training grounds have been closed until further notice.

The club says it has also informed its three most-recent opponents from League Two.

The club says testing was conducted following Saturday’s game. Results show that “a number of our first-team squad have tested positive for COVID-19.”

Those who tested positive will follow government self-isolation guidelines.