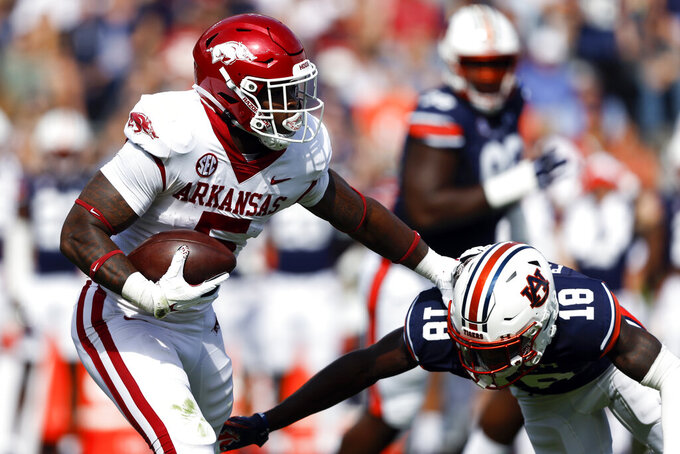 Arkansas running back Raheim Sanders (5) stiff arms Auburn cornerback Nehemiah Pritchett (18) as he carries the ball during the first half of an NCAA college football game Saturday, Oct. 29, 2022, in Auburn, Ala. (AP Photo/Butch Dill)

FAYETTEVILLE, Ark. (AP) — Each time Liberty coach Hugh Freeze has coached a game inside Reynolds Razorback Stadium, he has left with a bitter taste in his mouth.

Freeze remembers more than just the outcomes of those losses.

“The two times I’ve been there, it was the worst weather I think I’ve ever coached in,” he said. “It was awful. My daughters to this day, still they think Fayetteville — back then, they thought we were going to Alaska the way our trips were in late November there when I was at Ole Miss.”

His 23rd-ranked Flames have an opportunity to change his fortunes Saturday at Arkansas.

“There’s no doubt in my mind that (Freeze) will have them ready,” Pittman said. “They had a bye week and they’ll have their best game all year. I expect a really close, tight game. Hopefully we can make enough plays to win.”

Conditions look better for the Flames’ coach this time around. It is projected to be sunny and in the low 60s for Saturday’s game. Still, Freeze has been preparing his team for what he expects to be a rowdy environment.

Both the Razorbacks and Flames have enjoyed breakout season from their tailbacks.

Arkansas’ Raheim Sanders leads the SEC with 1,041 yards and seven touchdowns rushing. Liberty’s Dae Dae Hunter has tallied 821 yards and eight touchdowns on the ground and is coming off his best game to date. Hunter gutted BYU for 213 yards on 23 carries.

“Defensively, they will hit you, they can tackle you,” he said. “That was the same thing over at Ole Miss when (he) was there. Offensively, they’re going to have something that you haven’t seen. They are a well-oiled machine, they’re physical and they’re a very disciplined team.”

Since Pittman arrived at Arkansas in 2020, 28 of the 32 games he’s coached have been against either an opponent from the SEC, another Power Five conference or an opponent ranked in the AP Top 25. During that stretch, 23 of 30 bowl subdivision teams played have either been ranked or received votes.

Playing another ranked foe in Liberty, Pittman kept things simple on the recipe for his team to succeed.

“We’re trying to score and we’re trying to stop ’em from scoring,” Pittman said. “Until we get that mentality, I don’t think the kids will play as well as they need to.”

He pointed out how one play could have had the Flames at a much higher ranking. They lost to Wake Forest by a point after a failed two-point conversion.

“He’s going to have them believing because they should (win),” Pittman said of Freeze. “They’re (ranked) 23, and we’re not. They’re a two-point conversion away from probably top 20.”

Freeze said he knows Arkansas QB KJ Jefferson, a relationship likely established while the coach was still at Ole Miss.

Jefferson played at North Panola High School in Sardis, Miss., prior to Arkansas. The junior quarterback is the only SEC quarterback with at least 15 passing touchdowns and at least five rushing scores this year.

“KJ, I know him well,” Freeze said. “From Sardis, Mississippi. He’s as much involved in the run game as he is the pass game, which is a challenge.”

Arkansas and Liberty both played BYU in recent weeks, and each squad put up its most dominant offensive performance of the season. The Flames took down BYU 41-14 and racked up 547 yards in front of the largest crowd in school history. Arkansas traveled to Provo on Oct. 15 and defeated the Cougars 52-35 behind 644 yards from scrimmage.

Following the win over BYU, the Flames rewarded Freeze. Liberty extended his contract through the 2030 season. Freeze will reportedly earn over $5 million per season, which makes him the highest-paid Group of 5 coach.

This story has been updated to correct the Arkansas losing streak reference to 17 games.