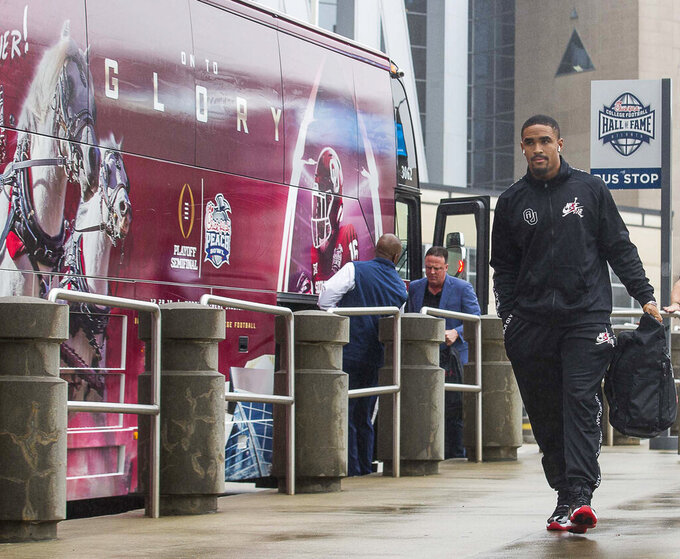 Oklahoma Sooners quarterback Jalen Hurts arrived at the Omni Hotel with the team in Atlanta, Monday, Dec. 23, 2019. The Oklahoma Sooners will face the LSU Tigers in the Chick-fil-A Peach Bowl at Mercedes-Benz Stadium Saturday, December 28. (Alyssa Pointer/Atlanta Journal-Constitution via AP)

The Tigers are playing in their first playoff semifinal. They will try to keep their high scoring going, even if they are without All-SEC running back Clyde Edwards-Helaire, who has an injured hamstring. The Tigers lead the nation in total offense while ranking second in passing and third in scoring. Heisman Trophy winner Joe Burrow has two 1,000-yard receivers, including Biletnikoff Award winner Ja'Marr Chase. The Sooners are looking to end an 0-3 drought in playoff semifinal games, including losses to two other SEC powers, Alabama and Georgia, the last two years.

Burrow has thrived while making winning decisions on run-pass-option plays in LSU's spread offense. He'll be tested by the speed and big-play skills of Oklahoma middle linebacker Kenneth Murray, who is a key to the Sooners' improvement on defense in 2019. Murray has 16 tackles for losses and four sacks.

Oklahoma: Chase won the award for the nation's top receiver, but don't overlook CeeDee Lamb, who was just as impressive for the Sooners. Lamb had 14 touchdown catches in 12 games this season, bringing the junior's career total to 32. He has six career games with at least 160 yards receiving.

LSU: Safety Grant Delpit won the Thorpe Award as the nation's top defensive back. He will be a key in the middle of the Tigers' defense after having two interceptions and 56 tackles this season.

The game matches the nation's top two offenses. LSU averages 555.4 yards, only slightly ahead of Oklahoma's 555.2. ... This is the second straight year Oklahoma has played the No. 1 team in the semifinal, after losing to Alabama 45-34 last year. ... Hurts will become the first quarterback to start a CFP game for two schools. ... Burrow set SEC records for yards passing (4,715) and TD passes (48). His TD passes led the nation. ... LSU is 13-0 for the first time since 2011, when it lost to Alabama in the BCS national championship game.