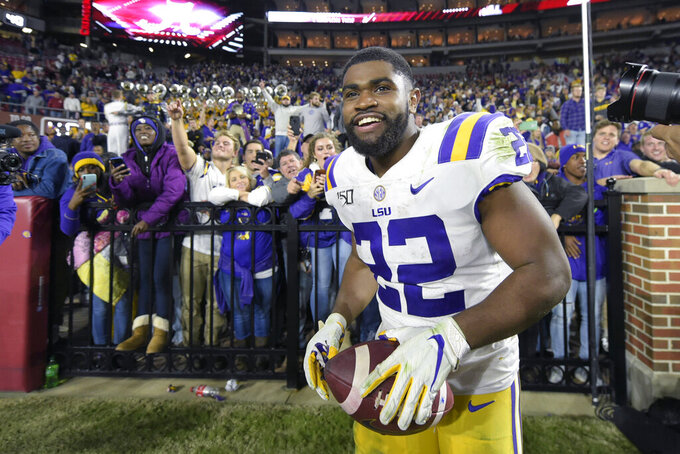 ATLANTA (AP) — Clyde Edwards-Helaire was a no-show at both the Peach Bowl media day and the team's practice on Thursday, more signs that No. 1 LSU's leading rusher could miss the playoff semifinal because of his hamstring injury.

LSU coach Ed Orgeron still holds out hope Edwards-Helaire could play against No. 4 Oklahoma. However, Edwards-Helaire's absence from the media day event, normally attended by all players expected to be available for the game, may suggest the junior is a long shot at best to play.

Edwards-Helaire had been scheduled to assume a prominent seat in the interview session, according to a diagram given reporters. Instead, center Lloyd Cushenberry III filled that spot beside wide receiver Ja'Marr Chase and quarterback Joe Burrow.

Orgeron said Edwards-Helaire “ran a little bit" on Wednesday without making cuts. A final decision on his availability may not be known before Saturday.

Edwards-Helaire leads the undefeated Tigers (13-0) with 1,290 yards rushing and 16 touchdowns. He was a first-team All-Southeastern Conference pick.

Freshmen Tyrion Davis-Price and John Emery Jr. are the leading candidates to fill in at running back. The third member of the committee would be Chris Curry, another freshman.

Emery said Thursday he is ready to seize the opportunity.

“I've been in the shadows, just chilling," Emery said. “I've still been working, though. I just had to wait for my time. It's coming Saturday. So I'm going to show out. My coming-out party."

Davis-Price ranks second among LSU's running backs with 270 yards rushing and six touchdowns. He has touchdowns in four straight games, including a 4-yard scoring run in the SEC championship game win over Georgia.

“I'm just going to attack it the same way I approach practice every day," Davis-Price said. “Every opportunity I get, I try to dominate that moment."

Orgeron said none of the three backups can replace Edwards-Belaire's versatile skills. Curry would be part of the group approach at running back.

“I really like his ball security," Orgeron said of Curry. “When we put him in there, in the games, he ran tough. He ran with an attitude. We think we're going to need some physicality in this game. The thing that Chris does, along with John and Tyrion, they do a combination of everything that Clyde does. So we'll have to use all three of them."