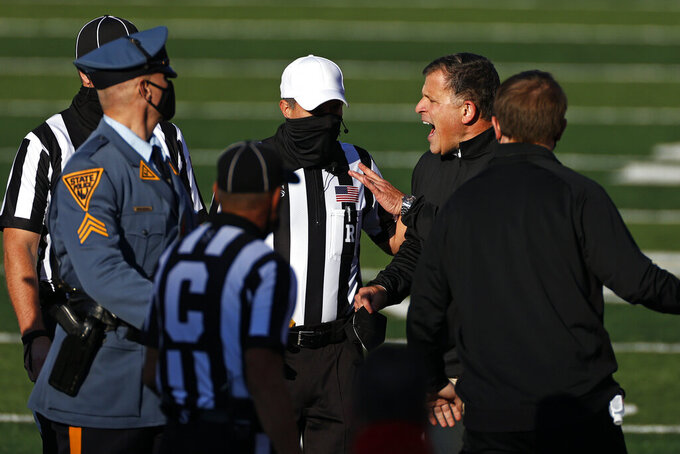 Rutgers head coach Greg Schiano argues with officials at the end of the first half of an NCAA college football game against Illinois on Saturday, Nov. 14, 2020, in Piscataway, N.J. (AP Photo/Adam Hunger)

PISCATAWAY, N.J. (AP) — Rutgers has been waiting for the day when its football program is on the same footing with some of the big boys of the Big Ten Conference.

It's happened this year. The Scarlet Knights and Michigan are right there with each other heading into Saturday night's game at SHI Stadium.

Unfortunately, they are near the bottom of the conference standings with 1-3 records and riding three-game losing streaks.

It's the worst start for the Wolverines since 1967, when they began 1-5 and finished 4-6. Surprisingly, there is new hope at Rutgers with Greg Schiano back for a second stint as coach and the team being more competitive.

Rutgers comes into the game off a disappointing 23-20 loss to Illinois. The Scarlet Knights held a 10-point second-half lead and saw quarterback Noah Vedral throw three second-half interceptions. He might be on a short leash this weekend.

“Some look at the record and it’s still the Michigan football team, they’re very, very talented, they run very, extremely well,” Schiano said. “They’ve had some injuries to very key players. I don’t know what their status will be for this Saturday, but they’re a very talented football team. So we certainly have a huge challenge ahead of us, one that we’re excited about.”

Some things to watch in the game:

Michigan has started Joe Milton at quarterback in each of its four games this season, but his job is in jeopardy after throwing as many touchdowns (four) as interceptions. He has completed 59% of his passes and averaged 242 yards passing. Milton was replaced in last week’s loss by Cade McNamara, who seemed to provide a spark as he capped his first drive with a touchdown pass. Harbaugh said the two will compete for the starting job in practice this week.

Rutgers wide receiver Bo Melton scored two touchdowns in his first three seasons. The senior has five in four games this year, four on passes and one on a punt return. The last Scarlet Knight with at least four receiving scores in a season was Andre Patton with five in 2016.

Melton had a career-high 150 yards against against Illinois, including a career-long 66-yard touchdown reception. Has has led the team in receiving yards all four games. He has caught 20 passes for 334 yards, an average of 83.5 yards.

The Wolverines have been criticized on Twitter and elsewhere, and have been encouraged to ignore the comments.

“We talk about every day, even the coaches after practice, they talk about don’t worry about what they’re saying on social media,” defensive back Germon Green said.

Rutgers has scored at least 20 points in all four games after only reaching the mark five times in its previous 36 Big Ten games, and 12 times in the first 52 league games since joining the conference in 2014.

The last time the Scarlet Knights scored 20 or more points in four consecutive conference games was in 2011 as a member of the Big East. Rutgers has scored 14 touchdowns this season, more than doubling the six it scored in nine conference games last season.

Scarlet Knights defensive lineman Michael Dwumfour played in 33 games for Michigan from 2016-19, while linebacker Drew Singleton saw action in seven games for the Wolverines in 2018.

Dwumfour had six tackles in the season opener at Michigan State, including 1 1/2 for losses.