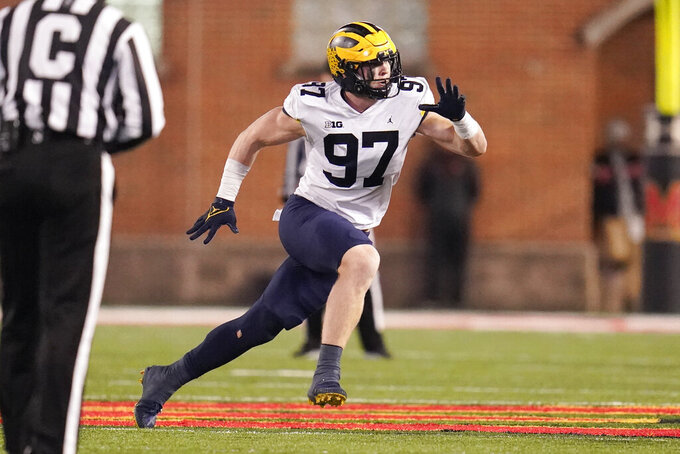 The senior defensive end earned the honor a night after finishing runner-up for the Heisman Trophy.

Hall of Fame safety Ronnie Lott presented Hutchinson with the award at the Pacific Club in Newport Beach. It goes to a player with strong academic work, community involvement and team leadership.

Hutchinson set a Michigan season record with 14 sacks in leading the Wolverines to a 12-1 record and the Big Ten title. He's the second Wolverines player to win the Lott Trophy, joining Jabrill Peppers in 2016.

Michigan will receive $25,000 for its general scholarship fund.

Hutchinson beat out Devin Lloyd of Utah and Georgia teammates Nakobe Dean and Jordan Davis. Each of those schools will receive $5,000 for their scholarship fund.

Hutchinson and the second-ranked Wolverines will play No. 3 Georgia in the College Football Playoff semifinals on Dec. 31 in Miami.

A national panel of more than 300 former college coaches, players and media members voted on the award.