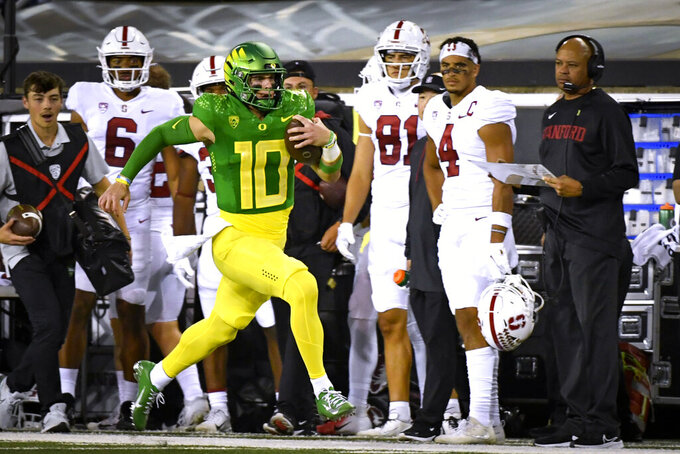 EUGENE, Ore. (AP) — When Oregon quarterback Bo Nix took off running in the third quarter, teammate Chase Cota was cheering for him to keep going.

Nix indeed kept going, and going — all the way for an 80-yard touchdown.

“I remember when I saw him get out and he was like 40 yards down the field, I'm like `Please don't slide, you got the touchdown!'” Cota said. “Sure enough, he made it.”

Nix threw for two touchdowns and ran for two more — including that 80-yarder — and No. 13 Oregon won its fourth straight game with a 45-27 victory over Stanford on Saturday night.

The Ducks (4-1, 2-0 Pac-12) have won 22 consecutive games at Autzen Stadium. They have not dropped a game this season after the opener against Georgia.

“A lot of positives we can take from this game, but also a lot of moments for growth,” Oregon coach Dan Lanning said. "We're trying to be the best version of us, and we're not quite there yet.

Stanford (1-3, 0-3) hasn't won since its opener against Colgate. It was the Cardinal's third straight game against an opponent in the AP Top 25. They also fell to USC and Washington.

“Obviously not the result we wanted tonight. Didn’t play well enough to get the result," Cardinal coach David Shaw said. "We had a couple of guys get banged up, we were down to one of our backup tackles before the game started, and during the game. That’s not an excuse. Our guys came out, they fought hard. Gotta find a way to start better, start faster.”

Nix completed 16 of 29 passes for 161 yards and led Oregon with a career-best 141 yards rushing on six carries. Oregon had 351 yards on the ground compared to Stanford's 127.

The Ducks appeared to score on their opening drive of the game, but the pass from Nix to Kris Hutson was called back because of a ineligible player downfield. They settled for a 38-yard field goal from Camden Lewis.

Before the end of the first quarter, Nix hit Chase Cota with a short pass and he sprinted into the end zone for a 48-yard touchdown.

Joshua Karty kicked a 23-yard field goal for Stanford to narrow the margin to 10-3. But the Ducks answered with Nix's 10-yard touchdown pass to Troy Franklin.

Linebacker Noah Sewell pretended to fly in celebration after running back a fumble 21 yards to set up Nix's 4-yard touchdown run. Jordan James added a 1-yard touchdown as time expired in the half to give the Ducks a 31-3 lead.

While the Ducks had firm control of the game by the break, their opening half was marked by 10 penalties for 90 yards. Oregon finished with 14 yards for 135 yards.

“We wanted to come out tonight and play a complete game and perfect game. I don’t think we did that, to be honest,” Oregon defensive back Bennett Williams said. “Yeah, we got the win, but there’s a lot of things that we got to go back and go to the drawing board and then fix up. That’s really the goal every week, right?”

McKee found Filkins for a 42-yard touchdown pass midway through the third quarter. Nix responded with a career-best 80-yard touchdown run on the Ducks' first play from scrimmage.

Nix became the first Ducks player to rush for 100 or more yards this season.

Elijah Higgins caught a 28-yard touchdown pass from McKee to make it 38-17 before the end of the third.

Sean Dollars added a 2-yard scoring run for the Ducks in the final quarter. Karty kicked a 53-yard field goal and Stanford closed out the scoring on Ari Patu's 18-yard touchdown pass to Mudia Reuben in the waning moments.

“Lost the first three games of our conference schedule. We’re gonna be better by the end of the year than we are right now. That’s the stance that we’re taking,” Shaw said.

Stanford: Cardinal offensive lineman Barrett Miller was carted to the locker room with an injury early in the game. ... Stanford upset then-No. 3 Oregon 31-24 in overtime last season. ... The Cardinal were without running back E.J. Smith, who will miss the rest of the season with an unspecified injury. Smith, the son of Dallas Cowboys great Emmitt Smith, rushed for 206 yards and four touchdowns through the first two games of the season. He missed last week’s game against the Huskies.

Oregon: The Ducks appealed outside linebacker DJ Johnson’s targeting penalty in the game against Washington State. It was denied, so Johnson missed the first half of Saturday night's game. ... Oregon allowed its first sack of the season early in the second quarter.

Stanford: The Cardinal host Oregon State next Saturday in another late Pac-12 game. The Beavers fell to Utah 42-16 earlier Saturday.