No. 1 Clemson turns to Uiagalelei with Lawrence sidelined 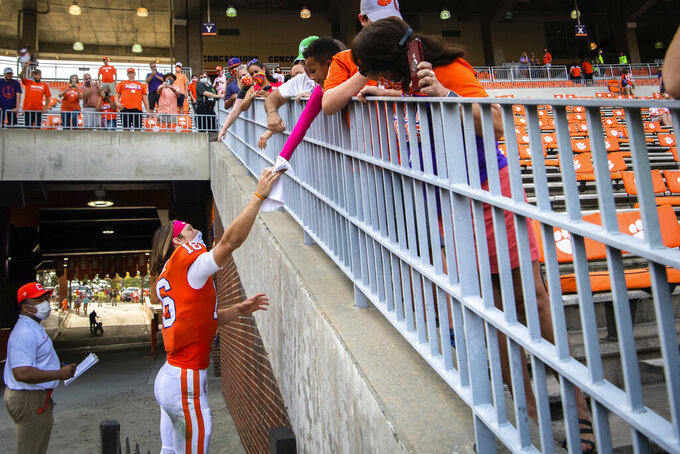 That's the situation for the Tigers, however, after Lawrence tested positive for COVID-19. He is out against the Eagles (4-2, 3-2 Atlantic Coast Conference) and his status going forward against No. 4 Notre Dame on Nov. 7 is unclear since Lawrence must sit out at least 10 days.

So ready or not, Uiagalelei (oo-ee-AHN-ga-leh-lay) gets the chance to show his skills as Clemson's starter.

Uiagalelei was a highly rated passer — ranked the No. 2 overall college prospect by Rivals.com — and is expected to be the next standout Clemson quarterback. Swinney hopes Uiagalelei has the kind of success at Clemson that Deshaun Watson, now with the Houston Texans, and Lawrence is enjoying as the leading Heisman Trophy candidate and likely top pick in the 2021 NFL draft.

Uiagalelei, the 6-foot-4, 250-pound freshman from Inland Empire, California near Los Angeles, enrolled in January and went through nine spring practices before the coronavirus pandemic shut down all college athletic activities in March.

He's shown a big arm and a power run game in five appearances, mostly after Lawrence and the Tigers (6-0, 5-0) have had games in hand.

“I just want to be mentally prepared and do my job,” Uiagalelei said earlier this month. “Just to get live bullets and get playing time. It's just super cool.”

He'll get plenty of playing time on Saturday, sooner than even he exepcted.

Uiagalelei had scholarship offers from a host of Top-25 teams including Alabama, Georgia, Ohio State and Oklahoma. He picked the Tigers, he said, partly because of Lawrence and the chance to shadow him for a season.

“Just to see what makes him great,” Uiagalelei said. “Seeing everyday the way he works, the different sacrifices he makes on the football field, off the football field and how he organizes his time. There are a lot of things I take from him to try and be as great a player as he is.”

In addition to Lawrence's talent, part of what makes him great is the talent around him — including another Heisman candidate in running back Travis Etiennne. And that should also help Uiagalelei.

Etienne, the two-time reigning ACC player of the year, has 522 yards and eight touchdowns this season.

Uiagalelei missed the Georgia Tech game with a bruised shoulder. He returned last week against Syracuse, completing one of his three passes in the final quarter.

The only quarterback on Clemson's roster to throw a touchdown pass other than Lawrence is walk-on Hunter Helms, a fourth stringer who tossed two scoring throws in the 73-7 blowout at Georgia Tech two weeks ago.

Lawrence has been exceptional this season. He's thrown for ACC-leading 1,833 yards and 17 touchdowns with only two interceptions. Lawrence is 31-1 as a starter in college, his lone loss coming to LSU in the national championship game this past January.

Swinney and Lawrence say he has mild symptoms from the virus and has isolated since first feeling ill. Swinney said no other players are in danger of catching the virus due to contact with Lawrence.

The 10-day isolation, if counted back from Wednesday's testing session, would end in time for Lawrence to play the Fighting Irish. Of course, it looked like Alabama coach Nick Saban would miss his team's game with Georgia after a positive test. Yet, three negative tests and three days later Saban was on the sidelines in a 41-24 victory earlier this month.

Clemson released its weekly athletic testing report on Friday (part of a thrice-a-week regimen), saying three student-athletes tested positive from Oct. 23-29. Department spokesman Jeff Kallin declined to say if other football players were among the positive tests. He said Lawrence gave the department permission to release his medical condition and while others have not.

Any football players that tested positive will be on the unavailable list along with anyone out with injuries, though no details are released about any player. The list will be released about two hours before Saturday's matchup with Boston College, as Clemson does each game day.

Clemson said it has administered 12,897 COVID-19 tests to athletes and athletic staff with 177 positives — 140 athletes and 37 staff. There have been no hospitalizations, the school said.

On Tuesday, Lawrence said the Tigers had done well to stay safe amid the ongoing pandemic.

“We do a good job here staying our social distance, six feet, in our meeting rooms wearing masks, all those things to where we're not close contacts, we're not around each other, so we couldn't transmit the virus,” Lawrence said.

The hardest part, Lawrence said Thursday, was missing a game with his teammates. He said he'll be watching and rooting for the Tigers “while I wait for the opportunity to rejoin the team.”