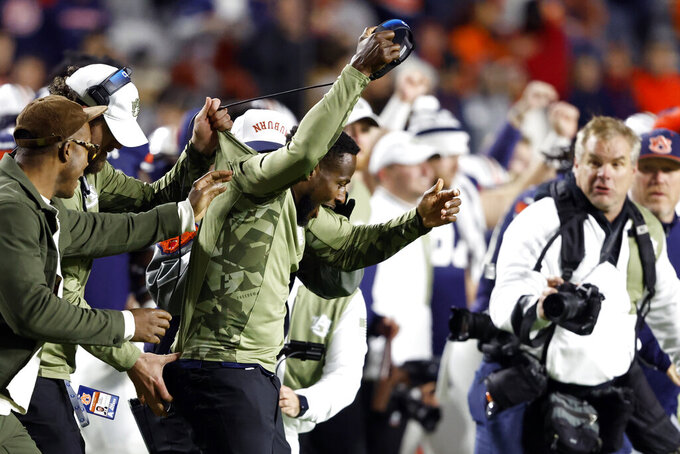 A look at Week 12 in the Southeastern Conference:

The final SEC game for both teams has lost much of its luster. The Bulldogs have already clinched a spot against No. 6 LSU in the league championship game. The Wildcats have fallen from a No. 7 ranking to a team that's coming off a loss to Vanderbilt. Georgia has won the last 12 meetings and hasn't lost in Lexington since falling 13-10 in 2006. Bulldogs quarterback Stetson Bennett has played well enough to be considered a longshot Heisman Trophy candidate while Kentucky's Will Levis is regarded as a potential first-round NFL draft pick. It's one of only four SEC matchups, including No. 5 Tennessee at South Carolina, No. 14 Mississippi at Arkansas and Florida at Vanderbilt.

If it's anything like last year's meeting... well, that would be hard to imagine. The Rebels are slender 2 1/2-point favorites, according to FanDuel Sportsbook and are trying to rebound from a loss to No. 8 Alabama. The Razorbacks have dropped two straight close games, 21-19 to Liberty and 13-10 to LSU. Ole Miss won last year's game 52-51 when Arkansas coach Sam Pittman's go-for-broke two-point attempt for the win failed. The teams combined for 1,287 total yards and 14 touchdowns. Pittman is expecting to get back quarterback KJ Jefferson, who missed the LSU game with a shoulder injury.

Carnell Williams is no longer a player, but Auburn's interim coach has made quite an impact in energizing the team and fans. The popular former Tigers running back and NFL rookie of the year led Auburn to a 13-10 win over Texas A&M that snapped a five-game losing streak begun under the fired Bryan Harsin. That followed an overtime loss at Mississippi State. Now, Williams is trying to get Auburn (4-6) to bowl eligibility with games remaining against Western Kentucky and at No. 8 Alabama.

Ole Miss freshman Quinshon Judkins is just 142 yards shy of the school’s 73-year-old single-season rushing mark. Fullback Kayo Dottley has held the school’s rushing record of 1,312 yards since 1949. ... Alabama shouldn't have a problem extending its 55-game regular-season nonconference winning streak against FCS Austin Peay. That includes 41 straight wins at Bryant-Denny Stadium. ... Georgia is tied for the national lead with 32 rushing touchdowns, 10 shy of the school record set in 2017. ... No. 5 Tennessee has had six consecutive sellouts for the first time since 2006. ... Vanderbilt's 24-21 win over Kentucky snapped a 26-game SEC losing streak.

Texas A&M is a 32 1/2-point favorite over UMass. These days, it's no guarantee the Aggies can score that many even in an obvious mismatch. This seems like a safe bet for Texas A&M to snap a six-game losing streak that's the program's longest since 1972. But covering that whopper of a spread might take improved execution and playmaking even against UMass. The Aggies are hoping to get back injured tailback Devon Achane and tight end Max Wright to support freshman quarterback Conner Weigman. Texas A&M is last in the SEC and 108th nationally in scoring 21.5 points per game. UMass is 130th of 131 teams (14.0 ppg) and the defense isn't faring much better.