No. 12 Utah finds defensive groove again, Arizona up next 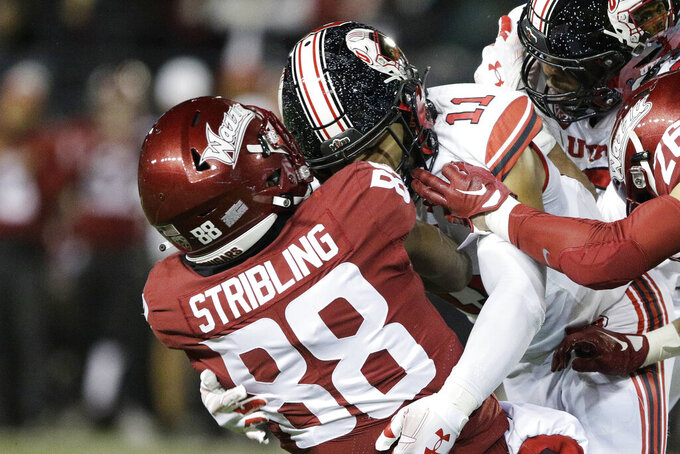 After surrendering an average of 529 yards and 42 points in back-to-back games against UCLA and USC, Utah rediscovered its punishing identity in last week’s 21-17 win over Washington State. The Utes generated four sacks and 10 tackles-for-loss while limiting the Cougars to 264 yards on just 50 plays.

“That was a great way to have fun again,” defensive end Junior Tafuna said. “Just go back and play assignment-sound football. It was great to play that way. We’re going to try to keep that rolling.”

Utah is currently the only Pac-12 team that ranks among the top 30 FBS teams in both total defense and total offense.

“When you judge the season as a whole to this point, I think we’ve done a real nice job defensively in a lot of areas,” Utah coach Kyle Whittingham said. “I think there’s still some deficiencies but, for the most part, very good defense.”

The Utes have shown their biggest improvement in defending the run and getting pressure on opposing quarterbacks. It led to fewer big plays when they faced Washington State.

“We got better at tackling,” cornerback Clark Phillips III said. “It’s an emphasis after certain games. This last week I feel like we showed that.”

Arizona is seeking to take its own defensive leap forward.

The Wildcats (3-5, 1-4) have surrendered 46.2 points and 564.2 yards per game in their five losses this season. Their last three opponents have averaged at least eight yards per play. Arizona has held only two opponents under 400 total yards.

Generating turnovers has also been a persistent problem for Arizona’s defense. The Wildcats rank 11th in the Pac-12 with just seven takeaways and have forced a single turnover in five league games so far.

“If we can take the ball away a few times that will make a huge difference,” Arizona coach Jedd Fisch said.

Utah quarterback Bryson Barnes made his first career start against Washington State after Cam Rising was a late scratch from the lineup. Rising injured his knee during the Utes’ 43-42 victory over USC and was unable to play after going through pregame warmups.

Barnes threw for 175 yards and a touchdown against the Cougars. The redshirt sophomore, who joined Utah as a walk-on in 2020, ran the offense well on short notice. Rising took the lion’s share of practice reps heading into the game.

“The times he’s been called upon, he’s answered the bell,” Whittingham said.

Few teams have taken a greater leap on offense from a season ago than Arizona. The Wildcats rank third among FBS teams in passing offense (340.1 yards per game) and are 20th in total offense (474.9). They ranked in the bottom 30 nationally in total offense last season.

“Our offense is hitting on all cylinders right now,” Fisch said. “It’s exciting to see when you start noticing things like going from 109th in big plays to first in big plays in one year.”

Arizona receiver Jacob Cowing enters Saturday’s game against Utah having caught a pass in 40 consecutive games. It is the second-longest such streak in the nation. Cowling ranks eighth among FBS players with 817 receiving yards. He is averaging 13.6 yards per reception and has caught seven touchdown passes this season.