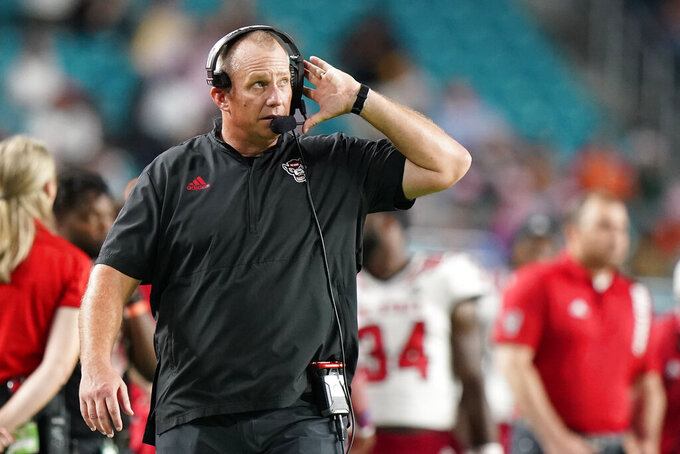 N.C. State is opening a season with lofty expectations of winning an Atlantic Coast Conference championship and reaching double-digit wins for only the second time in program history. But the Wolfpack will face a tricky test with a visit to the instate Pirates, an American Athletic Conference program located about 90 miles east of Raleigh in Greenville. N.C. State is just 1-4 in games there. As for ECU, fourth-year coach Mike Houston is trying to win a season opener with the Pirates for the first time.

N.C. State's defense against ECU's Holton Ahlers. Ahlers is a dual-threat quarterback closing in on multiple program records, including most yards rushing by a QB, most passing yards and total offense. Corralling him could present a challenge for the Wolfpack's defense, even with 10 returning starters from a unit that ranked 14th in the Bowl Subdivision ranks in scoring defense (19.7) last year.

ECU: RB Keaton Mitchell. Mitchell ran for 1,132 yards and nine touchdowns last season. The Pirates could use a strong performance from him to soften up the Wolfpack’s defensive front. He’s also set to return kickoffs.

N.C. State's No. 13 ranking matches its best in The Associated Press preseason college football poll set in 1975. ... ECU won the last meeting in Greenville 33-30 in September 2016, though N.C. State won the two most recent meetings at home to close the 2018 season and open the 2019 schedule by a combined 92-9 margin. ... East Carolina has won seven of the last 11 meetings with ACC opponents. ... This is N.C. State's first road opener since a shutout loss at South Carolina in 2008.