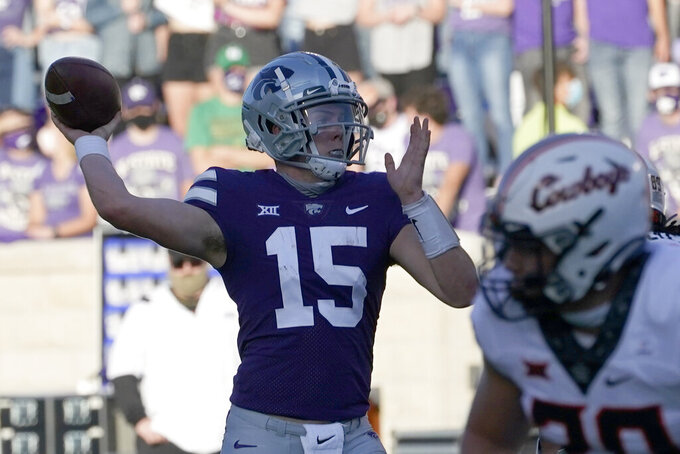 Kansas State quarterback Will Howard (15) passes to a teammate during the first half of an NCAA college football game against Oklahoma State in Manhattan, Kan., Saturday, Nov. 7, 2020. (AP Photo/Orlin Wagner)

MANHATTAN, Kan. (AP) — Oklahoma State was missing so many offensive players to injuries this week that coach Mike Gundy joked he took most of the reps at running back, even though he's a 53-year-old ex-quarterback who was hardly known for his wheels.

Good thing the Cowboys' defense showed up against Kansas State.

Jason Taylor II returned a fumble 85 yards for a touchdown late in the fourth quarter, and Oklahoma State stopped the Wildcats' 2-point try that would have tied the game with 2:08 to go, allowing the No. 14 Cowboys to escape with a 20-18 victory Saturday night that kept their Big 12 title hopes alive.

“We don't ever talk about it,” Gundy said, “but they need the credit this week for fighting through where they were and finding aw ay to win on the road and play this game. It's extremely difficult when you don't have your guys practicing, even though they're some veteran guys. You need to practice.”

Spencer Sanders was held to just 108 yards passing without dynamic wide receiver Tylan Wallace and with running back Chuba Hubbard slowed by an injury. LD Brown helped to pick up the load, running for 110 yards, as Oklahoma State (5-1, 4-1) leaned on a defense that was trampled by Texas a week ago.

“With all the adversity we faced, all the guys out, we just found a way," Oklahoma State linebacker Amen Ogbongbemiga said. "We have a great bond and it's games like this that define who we are.”

The Wildcats (4-3, 4-2) were forced to try for the tying 2-point conversion after Will Howard's short TD run because of their odd decision to attempt a 2-point try to stretch a 12-0 lead in the first half. Howard was incomplete on that one, and he never got a pass off on the second — he fumbled the ball as the pocket collapsed around him.

Oklahoma State guided the ensuing onside kick out of bounds and ran some time off the clock before punting back to the Wildcats, but Howard immediately threw an interception with 1:47 to go to seal their fate.

Howard finished with 143 yards passing and a touchdown and 125 yards rushing and another score, but most of the yards both through the air and on the ground came on a couple of big plays. He was just 10 of 21 through the air.

“You're a true freshman,” Kansas State coach Chris Klieman said, “and some of those things are going to happen, but you know what? That kid is competing his tail off. He's a competitor, and he's continued to improve.”

Heading into the game, everything appeared to portend a big night for Oklahoma State's offense: Hubbard ran for 296 yards against the Wildcats last season, Sanders threw for a career high 400 yards and four touchdowns last week against the Longhorns, and Kansas State was coming off a 37-10 shellacking at the hands of West Virginia.

The Wildcats dominated the line of scrimmage in the first half, forcing Sanders to continually throw away the ball when they weren't putting him on his back, and the hobbled Hubbard had a mere three carries for 11 yards at the break.

Kansas State wasn't exactly lighting it up, either. Blake Lynch kicked a pair of field goals, and it took Howard's 69-yard run late in the first half to set up a touchdown with 37 seconds left — the score followed by their ill-fated 2-point conversion.

That wound up being a big point.

After six first-half punts, Oklahoma State finally got on the board with a field goal. Then the Cowboys forced a three-and-out, and Brown ripped off a 50-yard run to set up Brennan Presley's easy touchdown jaunt on a jet sweep. And when Alex Hale added another field goal, the Cowboys had a 13-12 lead, their first of the game.

Kansas State was marching for the go-ahead score when Howard had the ball punched out by Israel Antwine and right into Taylor's waiting hands. The safety, who entered the game because of yet another injury injury to safety Tre Sterling, took off up the Kansas State sideline and was never touched on his decisive TD return.

“We were pretty beat up. We had a number of guys not practice this week on offense and it showed,” Gundy said. “I just told the team I was proud of them. They had their backs against the wall and got a win on the road.”

Oklahoma State won despite gaining just 261 yards on offense and committing six penalties for 65 yards. The biggest reason? The Cowboys didn't commit a turnover after coughing it up four times against the Longhorns.

Kansas State could have used the steady hand of senior quarterback Skylar Thompson, who is out for the season with a shoulder injury, and tight end Briley Moore, who got hurt last week against the Mountaineers. The offense was never able to get into a rhythm while playing a slew of underclassmen.

Oklahoma State remained in the locker room during the Big 12's pregame celebration of unity, leaving Kansas State to line up alone along its sideline. In fact, the Cowboys were so late exiting the locker room they barely got 11 players on the field to take the opening kickoff. They promptly went three-and-out on offense.

The Cowboys have a week off before heading to Norman for the Bedlam game against No. 19 Oklahoma on Nov. 21. Kansas State gets the week off before trying to snap its two-game skid at No. 17 Iowa State.