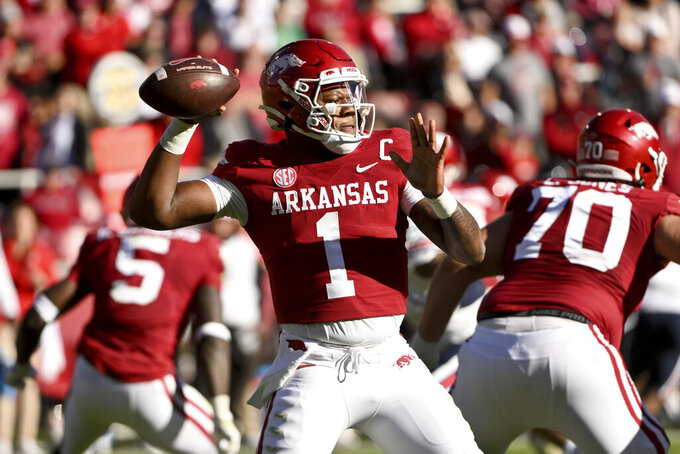 Arkansas quarterback KJ Jefferson (1) drops back to pass against Liberty during the second half of an NCAA college football game Saturday, Nov. 5, 2022, in Fayetteville, Ark. (AP Photo/Michael Woods)

Although LSU clinched the SEC West last week, placement throughout the rest of the division is still up for grabs. Ole Miss can finish as high as second and Arkansas as high as third. A loss for either team will guarantee a worse conference record than last year. The Rebels are jockeying for a New Year’s Six game, while the Razorbacks are trying to become bowl-eligible.

This may come down to stopping the run. The Rebels lead the conference with 259.8 rushing yards per game; the Razorbacks are third with 223.3. Arkansas is on the heels of its best overall defensive performance of the season in a 13-10 loss to LSU but gave up 198 yards on the ground, which is above the team’s average (146.3 yards). Ole Miss' run defense held Alabama to just 108 yards.

Mississippi: RB Quinshon Judkins continues to have a stellar freshman campaign with 1,171 rushing yards and 15 touchdowns. Both marks lead the SEC. He has been named the conference’s freshman of the week three times and needs 142 yards to set the school’s single-season rushing record that has stood for 73 years. He sits alone atop Ole Miss’ single-season rushing touchdown leaderboard.

Arkansas: QB KJ Jefferson missed the loss to LSU, and the offense gained a season-low 249 yards without him. He's one of two SEC quarterbacks with 15 passing touchdowns and at least five rushing scores.

Arkansas is 12-2 against Ole Miss in Fayetteville. ... Five of the series’ past seven games have been decided by four points or fewer. … With a win, Arkansas coach Sam Pittman would become the school’s fourth coach to earn bowl-eligibility in each of his first three seasons. ... Arkansas LB Drew Sanders leads the SEC with 8.5 sacks.