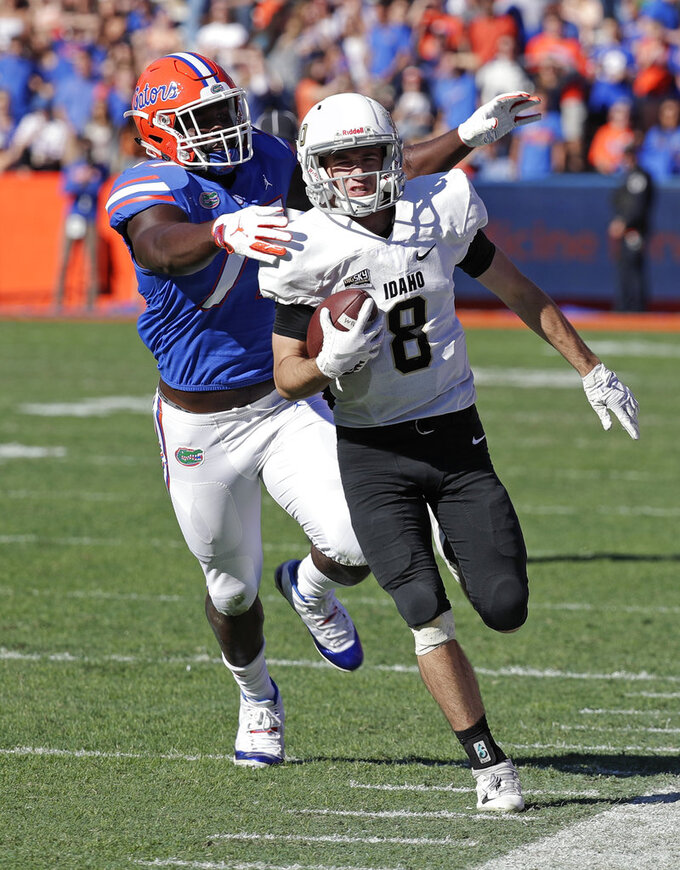 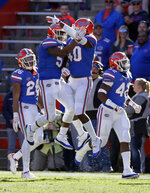 GAINESVILLE, Fla. (AP) — Florida had more on its mind than just running up a big score against Idaho.

Sure the 63-10 final score didn't hurt the No. 15 Gators' bid for a spot in a New Year's Six bowl game, but there was even more than that at stake. This was a game about the future,

With a win all but assured against an overmatched Idaho team when the Gators raced to a four-touchdown lead in the opening quarter, Florida turned its attention to some talented freshmen. Headlining the list was quarterback Emory Jones, currently serving as backup to starter Feleipe Franks.

Jones had played in two previous games this year and while Florida coaches want to add to his playing experience, they also are mindful of protecting his redshirt status of playing no more than four games this year. Jones saw extensive action on Saturday against Idaho and showed he'll be a contender with

Franks for the starting job next year. He completed 12 of 16 passes for 125 yards and two touchdowns and guided the Gators to their final three scores.

That brought a nod of approval from Gators coach Dan Mullen.

"I thought he did pretty good. Missed a couple things. Some great little leadership things with him," Mullen said. "There's a lot he can build off from this game. I didn't see any bad decisions really with where he went with the ball."

Freshman running back Dameon Pierce has played in all 11 games this year and now has 410 rushing yards in 60 carries after his team-leading 77-yard performance against the Vandals. He also liked what he saw from Jones.

"He's come a long way as leader and taking that leadership role on the field," Pierce said. "With him being one of my best friends, it's a great vibe together in the backfield. Emory is a calm, cool and collected guy and he's going to make plays. He handles adversity and plays like nothing happened."

Two other freshmen running backs made their second appearance of the year. Iverson Clement and Issac Ricks both had just one carry in their lone appearance before Saturday. Clement added to his total with three carries for 12 yards while Ricks had a 4-yard gain on his only carry.

Yet another freshman who looks to have a bright future with the Gators in the next three years is tight end Kyle Pitts. The 6-foot-6, 246-pounder has played in all but two games this year and has a pair of catches for 21 yards. He easily exceeded that total on his only catch against Idaho when he hauled in a 52-yard pass from Franks for his first collegiate touchdown.

Mullen likes the flexibility that Pitts brings to the offense.

"We played him flexed out an awful lot and he's going to be a mismatch problem for people as he continues to grow because he gives you the opportunity to be in different personnel groupings in the same personnel grouping," Mullen said. "Is he a tight end? Is he a receiver? As he continues to grow and learn every aspect of the offense (he) becomes a mismatch problem for people."

With the NCAA's new redshirt rule allowing freshmen to play up to four games and still preserve a redshirt season, Jones can play in one more Florida game (Florida State next week or the Gators' bowl game) while Clement and Ricks can play in both contests. All three will likely get extended playing time in those games as Florida coaches take a good look at what the future holds for the Gators.

Idaho (4-7) avoided a shutout when Cade Coffee connected on a 38-yard field goal in the third quarter and on a 12-yard pass from Mason Petrino to Jeff Cotton with 1:47 left in the game.

"Obviously we got our butts kicked," Idaho coach Paul Petrino said. "There were guys that gave great effort today, guys I think that will go back and watch the tape and be proud of themselves."

Idaho: It was a disappointing season for the Vandals who were a preseason pick to finish fourth (coaches) or fifth (media) in the Big Sky Conference. They were 0-6 in conference play, and were outscored by an average of 51.7 to 18.2.

Florida: The Gators likely would secure a spot in a New Year's Six bowl with a victory at Florida State next week. It would cap an impressive first season under coach Dan Mullen, who inherited a 4-7 team with holes on both sides of the ball.

Florida is unlikely to move up unless other teams ranked higher fall.

Florida: Plays next Saturday at rival Florida State, which has won five in a row in the series.