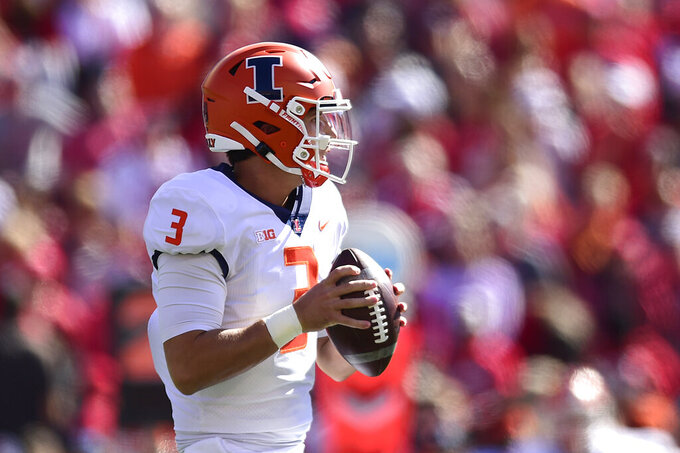 Bret Bielema has become something of a streak-snapper since taking the helm at Illinois last season.

The Illini earned their first win at Penn State since 2010 last year in a nine-overtime thriller. This season, Illinois snapped an eight-game skid to Iowa and notched its first win at Wisconsin since 2002.

Now, No. 24 Illinois will attempt to defend a streak on behalf of their coach, who has an unblemished 8-0 career record against Minnesota dating to his time as the coach of the Badgers.

“Very fortunate to get out of there with a win last year," Bielema said. “I think overall they're actually a better football team, probably.”

The Golden Gophers (4-1, 1-1 Big Ten) look every bit as capable of winning the Big Ten West as the Illini (5-1, 2-1) and will arrive in Champaign off a bye. The time off appears to have given star running back Mo Ibrahim enough time to recover from an ankle injury that forced him out of a 20-10 loss to Purdue on Oct. 1.

“We want to make sure we keep him safe, so unfortunately he wasn’t able to play (Oct. 1)," coach P.J. Fleck said. “But he looks really good this week.”

Ibrahim torched four opposing defenses for an average of 141.8 yards per game before that. His eight touchdowns trail only Michigan tailback Blake Corum (11) in the Big Ten.

The Gophers compiled a measly 47 rushing yards without Ibrahim against Purdue. His presence should be a boost against an Illinois rushing defense that allows just 67.2 yards per game.

“They’ve got three guys (on the line) that are all 300 pounds, they’re all strong,” Fleck said. “They do a great job of violently disengaging at the point of contact, being in their gap, then getting you out of the gap so they can go make the play.”

First-year offensive coordinator Barry Lunney Jr. said he felt “comfortable” with backup Illini QB Artur Sitkwoski being thrust under center after Tommy DeVito went down early with an ankle injury in the 9-6 win over Iowa.

Bielema said “good try” on Monday when asked who would start against Minnesota. If it is Sitkowski, he’ll have had the benefit of a full week of practice with the starters.

The extent of DeVito's injury is not known, but Bielema referred to it once as a re-aggravation of an old injury. A bye next week gives him extra time to rehabilitate before Illinois plays at Nebraska on Oct. 29.

Regardless of the Illini's starting quarterback, it helps to have a back like Chase Brown. He leads the nation with 879 rushing yards and is second at 151 per game to go along with four touchdowns.

Fleck called him “one of the best backs in the country, period.”

The biggest individual benefactor of Ibrahim's return is likely Minnesota quarterback Tanner Morgan. He is completing more than 70% of his passes so far this year, but went 18 of 33 with three interceptions against the Boilermakers.

Center John Michael Schmitz is happy to have Ibrahim back, too.

“Just a joy just having him back,” Schmitz said. “Just the energy he brings each and every day in practice, definitely glad to see him back to his normal self.”

With sixth-year standout Chris Autman-Bell out with a season-ending lower leg injury, the rest of the Gophers wide receivers have stepped up.

Daniel Jackson, who was limited in training camp and missed the first two games with a lower leg injury, leads the team with two touchdown receptions and had a career-high 110 yards on six catches against Purdue.

“His understanding of the offense is really high,” Morgan said. “He’s made a great jump from last year to this year, and that’s a credit to him. Even being out at times during training camp at the beginning of the season, he was active, he was still in the meetings learning, being present.”

Behind Minnesota, Illinois is the second-most represented state on the roster with 12 natives playing for the Gophers.

“I’ve got about 40-plus people coming. It’s always good when the game’s close. Family and friends get to make the quick little drive down to Champaign,” said linebacker Mariano Sori-Marin, who’s from Mokena in the Chicago suburbs. “It’ll be good to see ’em.”

There’s always a clamor for Illinois game (and Northwestern) tickets among the natives when the Gophers go on the road to Illinois.

“I need about 30 tickets, so there’s going to be a bandwagon of Nubin supporters out there,” said safety Tyler Nubin, who’s from St. Charles. “So it’s awesome.”