No. 24 Iowa's Smith-Marsette rebuilds trust after his arrest 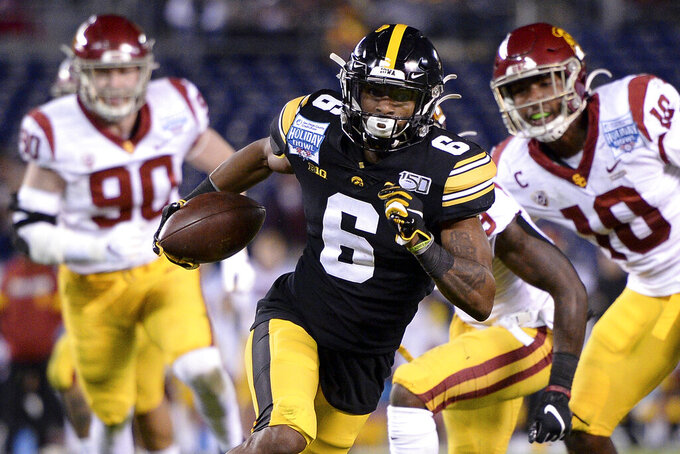 FILE - In this Dec. 27, 2019, file photo, Iowa wide receiver Ihmir Smith-Marsette (6) runs with the ball for a touchdown during the first half of the Holiday Bowl NCAA college football game against Southern California in San Diego. Smith-Marsette knew he messed up when Iowa City police pulled him over after clocking him driving 74 mph in a 30 zone in the wee hours of Nov. 1. His career was not over. In fact, coach Kirk Ferentz offered support, putting out a statement hours later saying the arrest was out of character and that Smith-Marsette was a great teammate. (AP Photo/Orlando Ramirez, File)

IOWA CITY, Iowa (AP) — Ihmir Smith-Marsette knew he messed up when Iowa City police pulled him over after clocking him driving 74 mph in a 30 mph zone in the wee hours of Nov. 1.

“I was thinking my football career was probably done,” the Iowa receiver said.

Smith-Marsette's blood-alcohol content measured 0.130, well over the 0.08 legal limit, and he was arrested and charged with operating while intoxicated.

His career was not over. In fact, coach Kirk Ferentz offered support, putting out a statement hours later saying the arrest was out of character and that Smith-Marsette was a great teammate

Smith-Marsette was suspended for one game, the 49-7 win over Michigan State on Nov. 7.

“That whole week, I was just coming back in, working hard, trying to earn the trust of my teammates again,” Smith-Marsette said. “I let them know that mistakes happen and that I’m here to do everything I can to show them I’m with them 100%.”

Smith-Marsette said his family gave him a shoulder to lean on, and Ferentz, offensive coordinator Brian Ferentz and wide receivers coach Kelvin Copeland also reassured him of their support. They also told him his actions weren’t acceptable.

“(They) just let me know they still support me know matter what, they’re there for me, and that we’ve got to put this behind us,” Smith-Marsette said. “Mistakes happen – as long as it’s a mistake and not something that you do again, which I won’t be doing again. Trust me.”

Smith-Marsette, who is back in the starting lineup, caught three passes for 44 yards in the No. 24 Hawkeyes' 26-20 win over Nebraska last week.

For the season ,the senior from Newark, New Jersey, has 14 catches for 173 yards and a touchdown. It’s a noticeable dip from his 44-catch, 722-yard, five-touchdown campaign in 2019. Part of the drop-off stems from the passing game producing less with new quarterback Spencer Petras.

The Hawkeyes have been more reliant on their ground game while deep passes, Smith-Marsette’s bread and butter, have been hard to come by in 2020.

Smith-Marsette said he isn’t frustrated by his statistics.

“If it’s working, why shy away from it?” he said of the run game. “When the deep ball comes, it’ll come. Until then, we’ll work with what’s working.”

Smith-Marsette still has NFL aspirations and wants to make it clear that he has grown from his mistake in November.

“I’m willing to do whatever it takes to prove to NFL teams that I’m ready to play at the next level, grow up, mature a little bit more, and be ready to put my best foot forward,” he said.