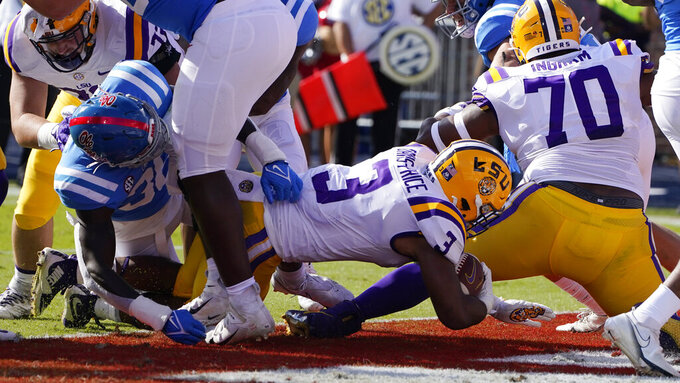 LSU running back Tyrion Davis-Price (3) follows the block of guard Ed Ingram (70) and dives into the end zone for a touchdown during the first half of an NCAA college football game against Mississippi in Oxford, Miss., Saturday, Oct. 23, 2021. (AP Photo/Rogelio V. Solis)

Line: Alabama by 29 1/2, according to FanDuel Sportsbook.

Alabama is trying to continue marching toward the Southeastern Conference championship game and a potential College Football Playoff berth. LSU is trying to finish coach Ed Orgeron's final season strong — and there wouldn't be much bigger than a season-spoiling win over the SEC West rival.

Alabama QB Bryce Young, the Heisman Trophy front-runner, takes on a defense that has struggled against the pass. Young is tied for fourth in passing touchdowns with Pittsburgh's Kenny Pickett, and he's fifth in passing efficiency (177.1). The Tigers rank 87th in pass defense, giving up an average of 242.5 yards per game. They have an injury-depleted secondary, with both starting cornerbacks out and neither normal starter at safety expected to play.

LSU: RB Tyrion Davis-Price likely needs a solid game to help the Tigers remain competitive. He had a huge game against Florida and has run for 627 yards and six touchdowns (all six in the last three games), including 287 yards against the Gators. More importantly, LSU is 27-2 under Orgeron when producing a 100-yard rusher.

Alabama: RB Brian Robinson Jr. can get overshadowed by Young. But Robinson has come up big against SEC competition, averaging 115.2 yards per league game with 10 touchdowns.

Alabama has won nine of the last 10 meetings with LSU, but eight of the games since 2005 have been decided by seven points or less. That includes three that went to overtime. ... Orgeron is 1-4 against Alabama with LSU and 1-7 overall. ... LSU linebacker Damone Clark leads the nation with 12.2 tacklers per game, including 19 against Ole Miss. Tide linebacker Will Anderson Jr. is tops nationally with 17 tackles for loss. ... Four LSU walk-ons were awarded with scholarships last week: TE Jack Mashburn, WR Evan Francioni, OL Spencer Payne and RB Nick Demas.